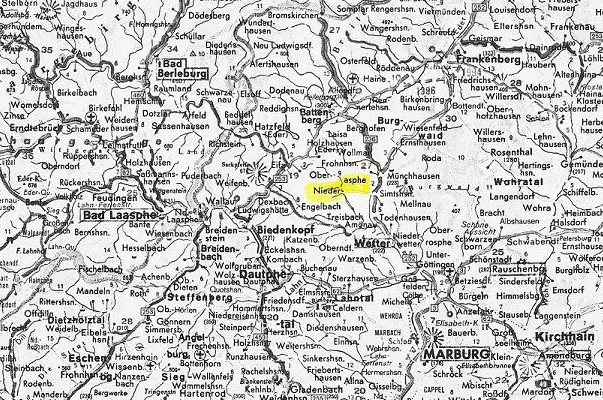 Niederasphe Germany, the ancestral home of the Mankel family (later Mankell), is highlighted in yellow. The town, in the state of Hesse in central Germany, is northwest of Marburg am Lahn (also on the map) and east of Cologne. While Marburg is on maps of Germany, Niederasphe usually is not. The story of the Mankel/Mankell family begins here with Johan Herman Mankel 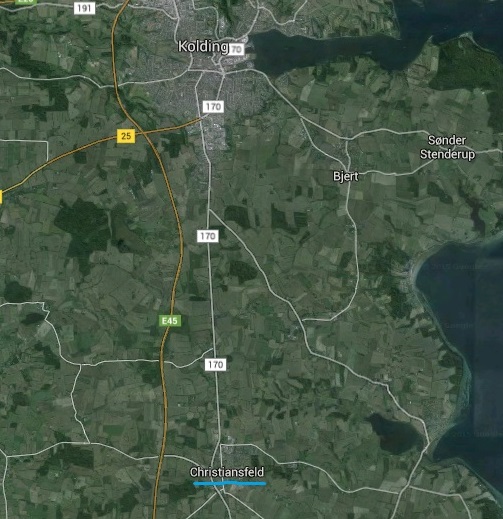 Christiansfeld, Denmark, located between Ĺbenrĺ and Kolding.
Home of Johan Herman Mankell, and his first wife Johanna Keyser.
Their children, including Wilhelm August Mankell, were born in Christiansfeld.

This map of Sweden identifies the 25 historic provinces and larger cities.
Numbers on the map indicate areas in Sweden where ancestors lived.

1. Skĺne Province in southern Sweden is the ancestral home of the Mortenson family. Vivian Jordin Mankell's grandmother Mary Mortenson was from Onslunda, southwest of Kristianstad. Mary's mother Margreta Nilsdotter was from Onslunda also. Mary's father Ole Mortenson was from the Tryde area which is south of Onslunda. He moved to Onslunda after the marriage. The family left Sweden in 1872 and settled in Cosmos (Meeker County) Minnesota.

2. Karlskrona, along the southeastern shore of Sweden, was the home of Johan Herman Mankell after he left Christiansfeld Denmark. Johan and his second wife Helena Svedman had several children born in this city.

4. Gothenburg (Göteborg) on Sweden's western shore was the home of Wilhelm August Mankell, his son H.W. Mankell, and HW's wife Elizabeth Olsson. HW left Sweden in 1856, arriving in Pennsylvania and was in Red Wing Minnesota by 1857. Elizabeth emigrated from Sweden in 1857 and settled in Red Wing. They married in 1857 in Vasa, Minnesota.

5. Linköping, southwest of Stockholm, was the home of Friederica Amalia Mankell (daughter of Johan Herman) and her family (Gnosspelius).

6. Härnösand, north of Stockholm, was the home of 2 of Johan's youngest children, Sven Gustaf and Emil Theodor Mankell.

7. Älvsborg, Övre Jordalavägen (Upper Jordala Road) west of Mellby in Älvsborg Län (Älvsborg County, also spelled "Elfsborg" and previously known as Västergötland Province). The Jordin family is from Älvsborg, an area known as Jordala, near Mellby (northeast of Gothenburg/Göteborg). Vivian's grandfather August Jordin and his parents Anders Pettersson and Anna Greta Andersdotter left Sweden, settled in Beckville (south of Litchfield), Meeker County, Minnesota, and took the surname "Jordin" from the location of their home in Sweden. 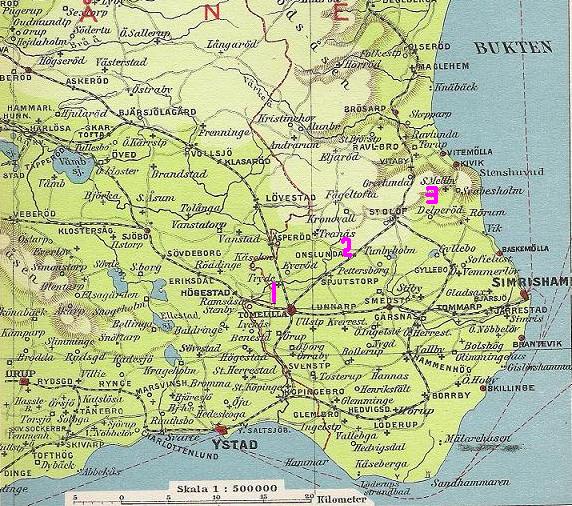 A closer view of southeastern Skĺne Province, on the southern tip of Sweden.


Numbers on the map indicate areas in Skĺne where the Mortenson ancestors lived. 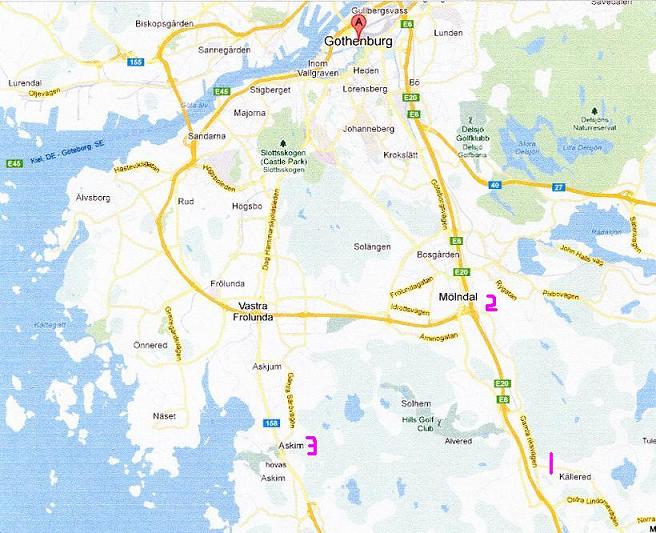 A closer view of Göteborg, in western Sweden, and areas south. 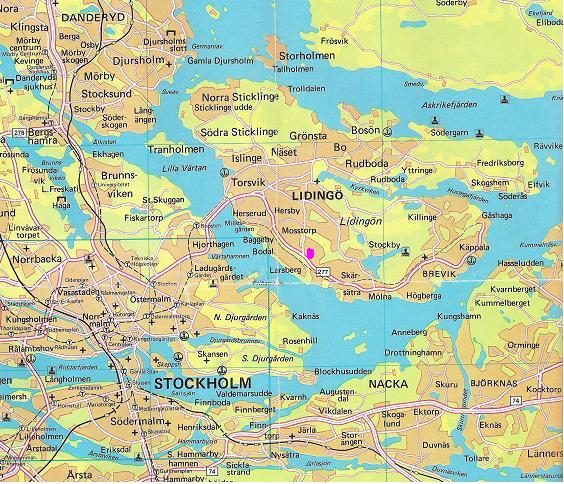 Stockholm and Lidingö Island. Indicated on this map is the location of OA Mankell's home, Hermineberg. 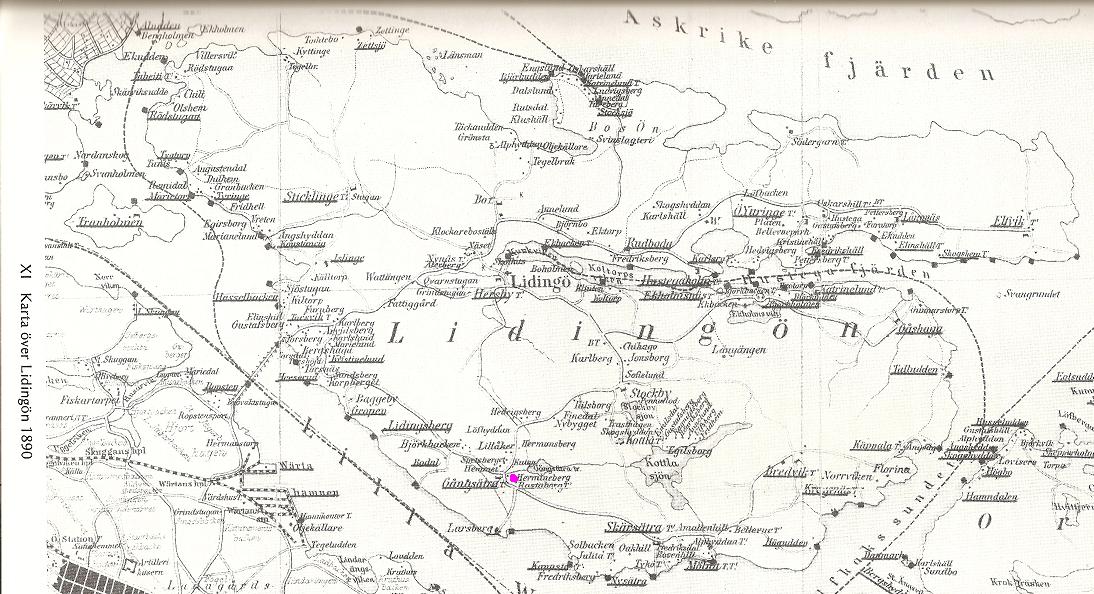 This closer view of Lidingö Island in 1890 identifies the homes on the island.
Hermineberg, the home of OA Mankell, is highlighted. 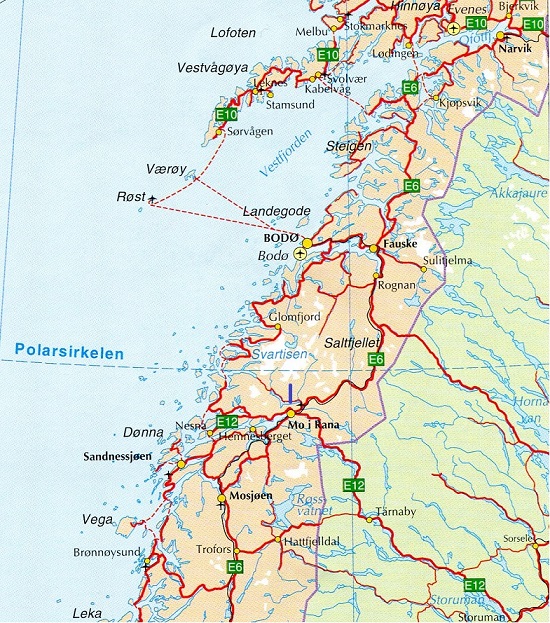 1. Mo i Rana , in Nordland area of northern Norway (just south of the Arctic Circle) was the home of Andrew Johnson (aka Anders Jenson) and his father, Jens Jorgens Zachariason (Sakariason) who settled in Irving Township, Kandiyohi County, Minnesota. Andrew was the grandfather of Vivian Jordin Mankell. Andrew left Norway in 1881; Jens Zachariason left in 1890. 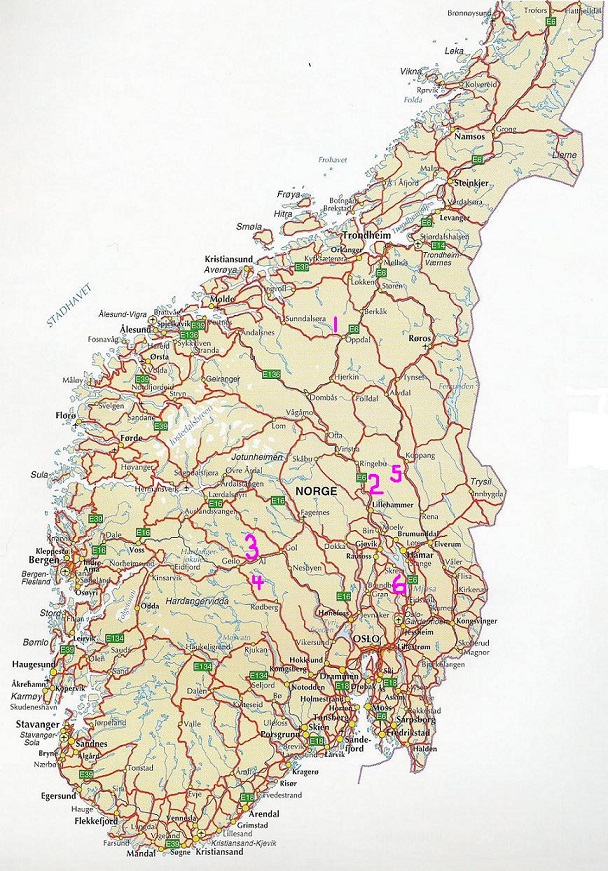 1. Oppdal in the Oppdal Valley was the home of Iver and Guro Olsen and their daughter Ragnhild. Ragnhild Olsen Johnson was the grandmother of Vivian Jordin Mankell.

2. Fĺvang in Gudbrandsdalen Valley and north of Lillehammer, was the ancestral home of the Hjelle family including Bastina Hjelle Christopherson, grandmother of Orlynn Mankell.

3. Ĺl in Hallingdal Valley was the home of Margit Syversdatter (who married Sven Borgen while in Norway)

4. Ĺsberg in Numedal Valley was the home of Sven Gunderson Borgen and his family.
Sven and Margit and their children (Ragnhild, Gunder and Bergit) emigrated from Norway in 1857, arriving in Quebec. They then traveled to Beloit, Rock County Wisconsin. They settled their Kandiyohi County Minnesota homestead (between Lake Mary and Swenson Lake) in 1859.

5. Stor-Elvdal in Osterdalen Valley was the home of Gemine Negaard (who later married Gunder Swenson).

6. Holter and Tangen are located in Nannestad District in the County of Akershus. Holter was the home of Lars Christopherson. Just north of Holter is Tangen, the ancestral home of his wife Anna Tangen. (See map below) Lars, Anna and family (including son August who later married Bastina Hjelle) left Norway in 1868. They arrived in St. Cloud MN, then traveled to Lake Johanna in Pope County, and later to Arctander Township in Kandiyohi County.


A detailed list and maps of the family farms in Norway