Bastina Olsen Hjelle (1870-1944), born in Fĺvang Norway, on July 2, 1889. (Norwegian spelling was Bastine). 'Olsen' was the family's surname, with 'Hjelle' as the farm name. It was very common for a person to be known by the farm name. Following immigration many settlers used the farm name as the surname. Fĺvang is in the valley known as Gudbrandsdalen (see maps of family farms in Norway), just a few kilometers north of Lillehammer, the home of the 1994 Winter Olympics. (The downhill skiing events were in Fĺvang.) The Hjelle farm was located southeast of the village; only foundations of the farm remain on the hillside. 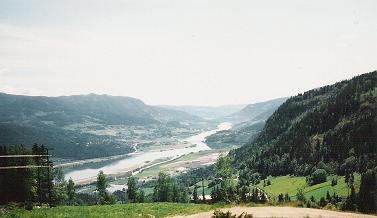 Gudbrandsdalen Valley of Norway, looking south from the olympic ski lift.
Fĺvang is in the distance, along the river. 1995 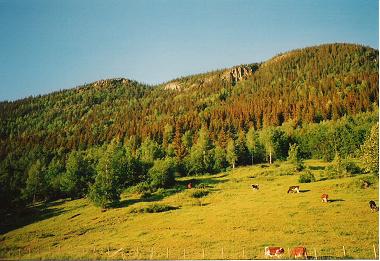 Hjelle farm was on this hillside south of Fĺvang, on the east side of the river.
Only the building foundations remain. 1995

Ole Hjelle and Marte Engebretsdatter Hjelstuen (1831-1856) had three children, all born in Fĺvang, who grew to adulthood. One baby girl died at birth. Siblings Engebret and Marie immigrated to Minnesota.

Ole's second marriage was to Kjersti Hansdatter Prestangen (1833-1905), born in Fĺvang. They had 11 children, all born in Fĺvang, and all immigrated to Minnesota: 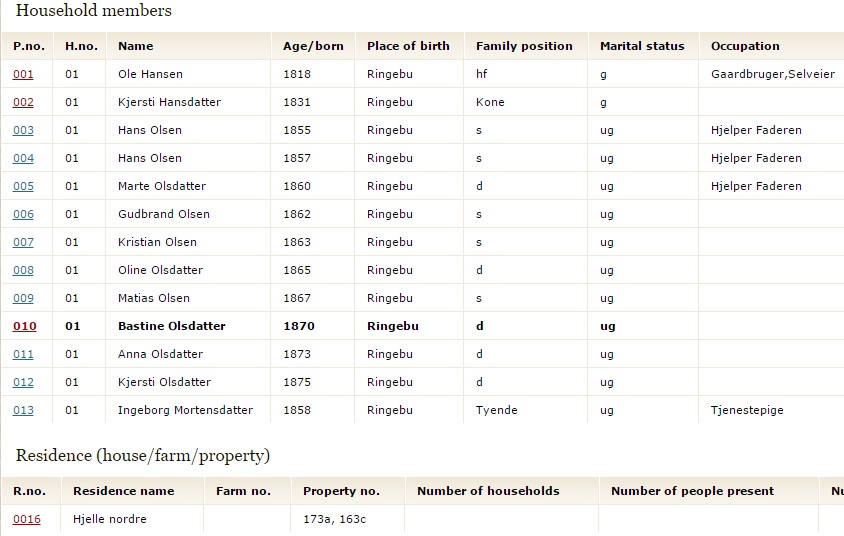 
Hans Olson Hjelle Hjelstuen was the only child of Ole Hjelle who remained in Fĺvang, Norway. As his parents and siblings left the area, Hans moved from the Hjelle farm to the Hjelstuen farm (also in Fĺvang) to live with his maternal grandparents and took the name of their farm. Several of his descendants currently live near Fĺvang and Oslo in Norway.

Ole and Kjersti Hjelle
(Thanks to Diane Christopherson for the photo.)

Ole Hansen Hjelle died on July 30, 1910 in Marshall County, Minnesota. Here is the death notice in the Warren Sheaf newspaper on August 4, 1910.

Ole H. Hjelle, one of the old settlers of town of Newfolden died July 30, at the ripe old age of 92 years. He came to the county 22 years ago. Six sons, seven daughters and nearly 100 grandchildren mourn his death.

Bastina's parents and many of her siblings settled in northern Minnesota in the Newfolden area of Marshall County. Several of her Hjelle relatives applied for and received homesteads in Marshall county and were required to obtain US citizenship prior to receiving the homestead. Ole Hansen Hjelle became a naturalized citizen at the age of 79, on March 14, 1898. Hjelle family members receiving homesteads in Marshall County include: 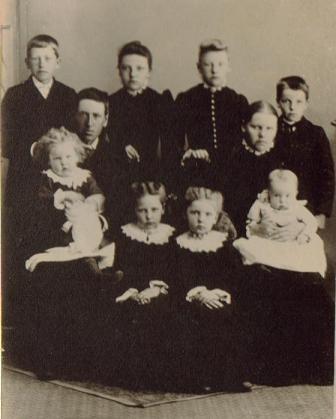 Engebret and Karen Hjelle, c1891. The baby is Carl Hjelle.
(Thanks to Mason Hjelle for the photo.)

As a girl in Norway, Bastina was a "Seter" girl, meaning that she spent her summers on the “seter” or summer farm located up in the mountains. Seters often comprise a cabin, barn and other out buildings. Historically, families would bring their cows or sheep to the seter for the summer months. One girl would live there and tend to the animals. She would make butter and cheese for the family to use during the winter months or to sell. One family story states that as a seter girl, Bastina would sing to bring the cows home from the pasture for milking. Only foundations remain of the Hjelle seter in Norway.

Bastina Hjelle, 12 siblings, and their parents came to the USA at different times over a span of 20 years. Bastina, her parents and 3 siblings (Oline, Anna, Mattias) arrived at the Port of New York on May 21, 1888 on the ship "Umbria". The ship departed from Liverpool, England, and Queenstown, Ireland. Father Ole was 70 at the time of the voyage; Mother Kjersti was age 55. Several siblings were already in the US. Bastina's parents and most of her siblings (Engrebret--son of Ole and first wife Marte, Hans, Gilbert, Christian, Oline, Mattias, Anna, Clara, Randine, Ole) settled in the Marshall County area of northern Minnesota. Some later moved from Marshall County: Clara to Ottertail County, Ole to Kittson County; Christian to Pennington County.

Bastina immigrated to Kandiyohi County in 1888 and was one of the last in her family to leave Norway. One brother, Hans, remained in Fĺvang, Norway. Hans then moved to his grandparents farm, took the farm name as his last name and became Hans Hjelstuen. Bastina settled in Arctander Township because August Christopherson paid for Bastina’s ticket to come to Kandiyohi County, with the agreement that Bastina would work at the Christopherson homestead in Arctander Township to pay off her debt. Before the agreement was over, Bastina and August married in 1889 and continued to live on the homestead. For more information, please see the Christopherson family page.)

Bastina and 2 sisters (Martha and half-sister Marie) settled in Kandiyohi County, primarily in Arctander Township. Many of the descendants of these three sisters remain in area, in Arctander and Lake Andrew Townships and in the town of New London.