Maps of ancestral homes in Europe

Prior to emigrating from Norway to the United States, my Norwegian ancestors lived on farms, from areas north and northwest of Oslo to areas near the arctic circle. Here is a brief background on the farming system in Norway from which the emigrants departed. During the Middle Ages the king, the church and a few wealthy absentee land owners owned land in Norway. These groups then rented their lands to tenament farmers and also hired farm workers. Gradually more and more farmers started to own their own farms. By the late 17th Century this was about 20% of all land ownership. The bulk of ownership remained with the King, church, absentee land owners. At the time of the 1865 Norway Census, it is estimated that 75% of the population lived on farms. For a good summary of these land ownership, farm numbers, and terminology read the John Follesdal article.

Here is brief information regarding the names and spellings of the ancestors. Each person has the given name and last name (father's first name plus ...datter/dotter or ...sen/son) People also took the name of their farm residence. To complicate things, the name or spelling may have changed when in America. Upon arriving in America the following immigrants used the farm name as the last name: Sven Gunderson Borgen and Margit Borgen; Bastina Hjelle and her parents Ole and Kjersti Hjelle; Gemine Negaard and her parents Halvor and Martha Negaard. Lars Christopherson sometimes used the last name Holter. Lars' son and immigrant August Christopherson did not. Sven Borgen's son Gunder (also an immigrant) used the last name Swenson. Andrew Johnson/Jenson and Ragnhild Olsen did not use their farm names after arriving in America.

Searching for family farms in Norway? Here are some helpful links. visitnorway.com has a great map of current farms. Zoom in to a specific area and the farm names appear. Oluf Rygh has an online database for searching by farm name, farm number, or geographic area (County, municipality, Parish). Remember that the same farm name can be found in more than one geographic area. To find the correct farm it is important and useful to know the correct Amt (county, ie Nordland, Buskerud, etc) and/or Kommune (municipality). 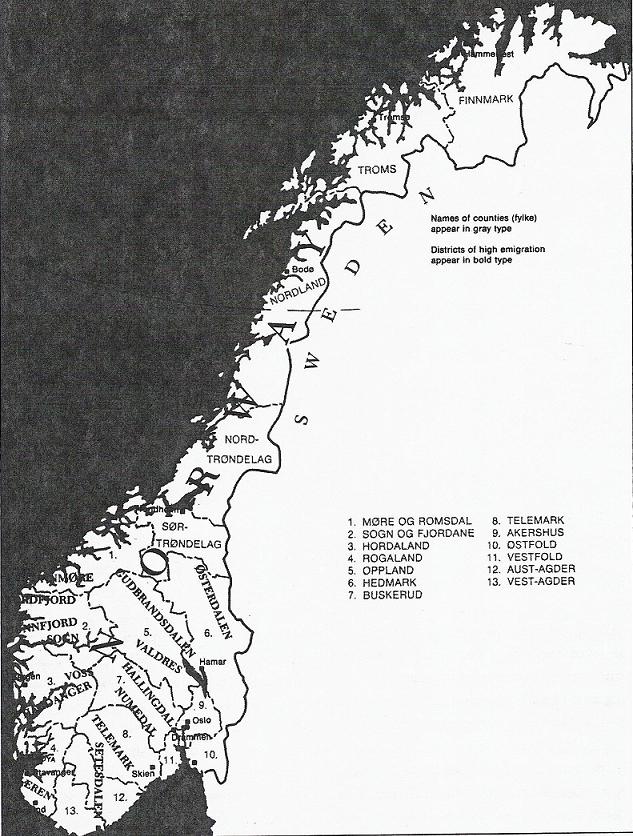 This map of Norway identifies the different Valleys (Dalen) in Norway. Many of the Norwegian ancestors are remembered by the valley in Norway where they lived before coming to America: 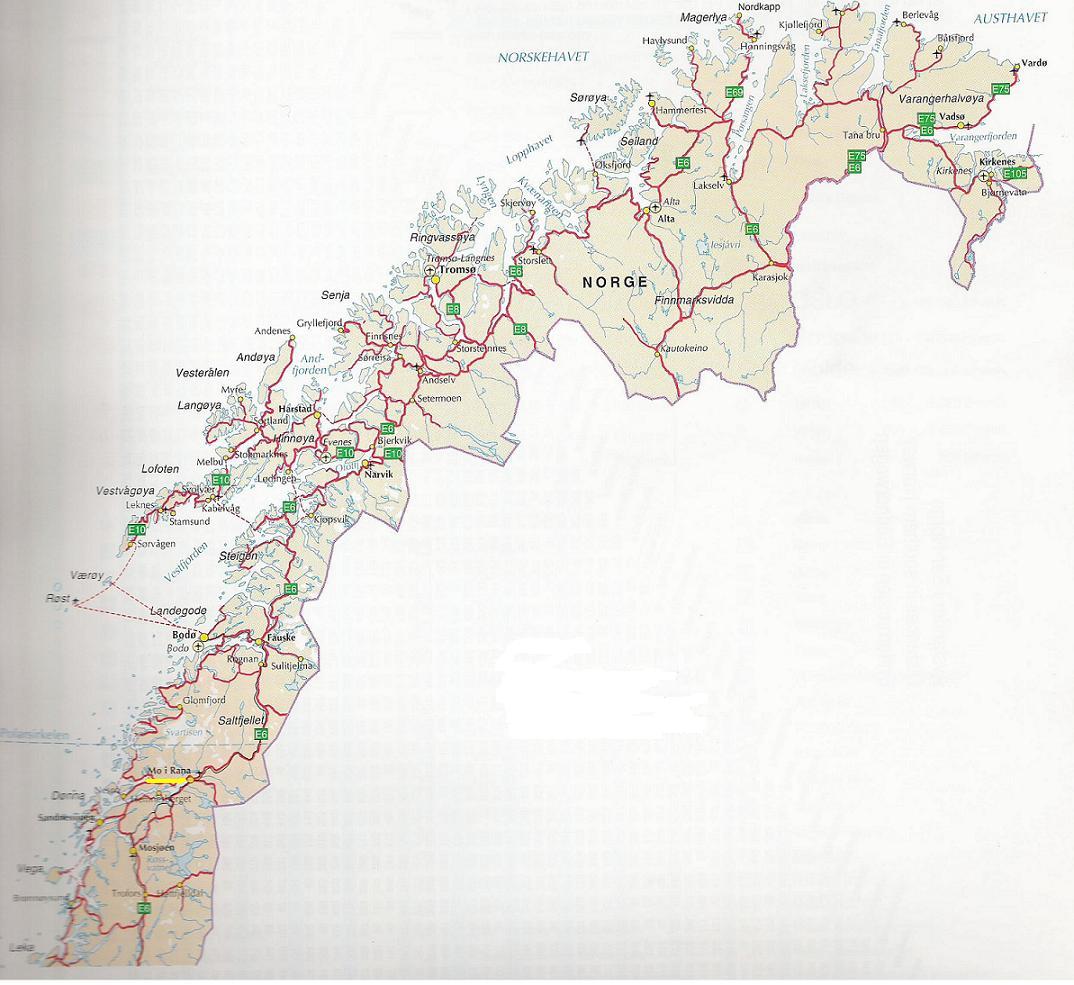 Mo i Rana (underlined in yellow), in Nordland area of northern Norway (just south of the Arctic Circle) was the home of Andrew Johnson (aka Anders Jenson) and his father, Jens Jorgens Zachariason (Sakariason) who settled in Irving Township, Kandiyohi County, Minnesota. Andrew was the grandfather of Vivian Jordin Mankell. Andrew left Norway in 1881; Jens Zachariason left in 1890. 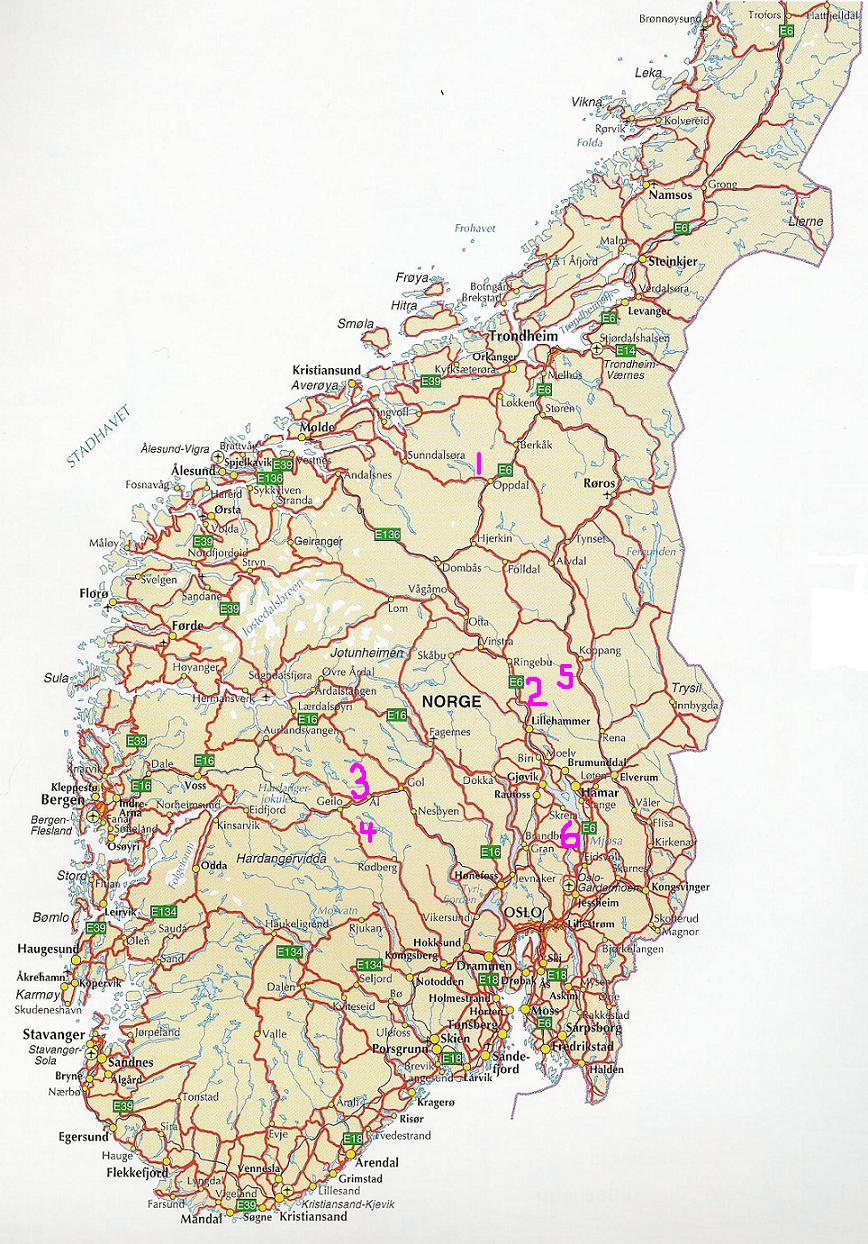 1. Oppdal in the Oppdal Valley (Drivdalen Valley) was the home of Iver and Guro Olsen and their daughter Ragnhild. Immigrant Ragnhild Olsen (later married Andrew Johnson) was the grandmother of Vivian Jordin Mankell.

2. Faavang in Gudbrandsdalen Valley and north of Lillehammer, was the ancestral home of the Hjelle family including Bastina Hjelle (later married August Christopherson), grandmother of Orlynn Mankell. Lillehammer was the location of the 1994 Winter Olympics and has been highlighted as one of the top 100 places to visit in Norway.

3. Aal in Hallingdal Valley was the home of Margit Syversdatter (who married Sven Borgen while in Norway)

4. Aasberg in Numedal Valley was the home of Sven Gunderson Borgen and his family. Sven and Margit and their children (Ragnhild, Gunder and Bergit) emigrated from Norway in 1857, arriving in Quebec. They then traveled to Beloit, Rock County Wisconsin. They settled their Kandiyohi County Minnesota homestead (between Lake Mary and Swenson Lake) in 1859.

5. Stor-Elvdal in Osterdalen Valley was the home of Gemine Negaard (who later married Gunder Swenson).

6. Holter and Tangen are located in Nannestad District in the County of Akershus. Holter was the home of Lars Christopherson. Just north of Holter is Tangen, the ancestral home of his wife Anna Tangen. Lars, Anna and family (including son August who later married Bastina Hjelle) left Norway in 1868. They arrived in St. Cloud MN, then traveled to Lake Johanna in Pope County, and later to Arctander Township in Kandiyohi County. 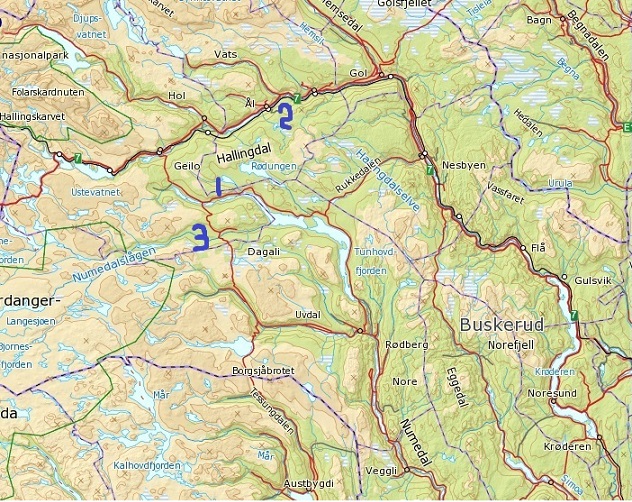 (1) Sven Gunderson's BORGEN farm was north of Dagali, Numedal Valley,
(2) Margit Syvertsdatter was from Aal, Hallingdal Valley; unknown if she was from a farm.
(3) Sven's mother, Ragnild Asbjornsdatter was from the AASBERG farm, west of Dagali.
She did not emigrate from Norway. 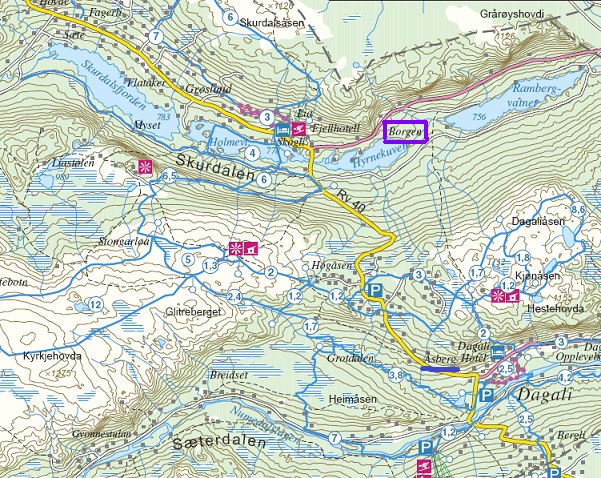 BORGEN farm identified north of Dagali
AASBERG farm is west of Dagali.
Here is a link to a larger map, where the Borgen farm is to the far right, below the chart. 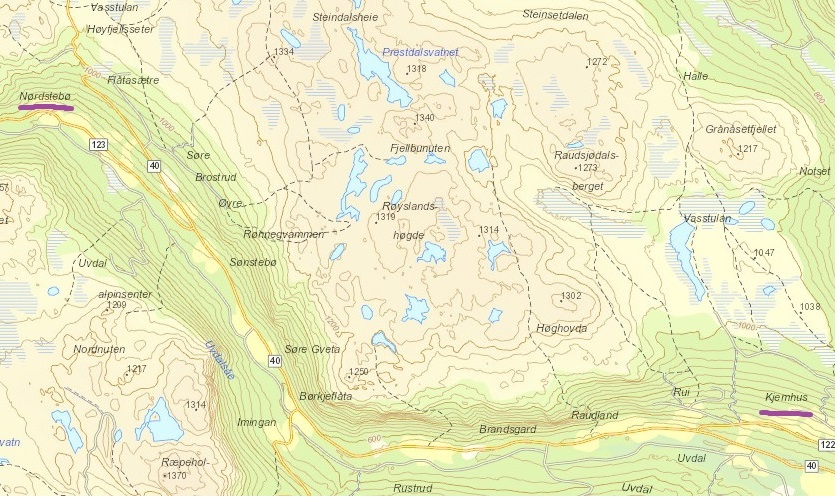 The area in the above map is south of Dagali, following Highway 40.
Sven Gunderson Borgen's paternal grandfather (Svein Gjemundsson) was from the KJEMHUS farm;
Sven's maternal grandmother (Helge Steinsdatter) was from the NORSTEBO farm.
Both farms are in the Uvdal area (formerly Opdal) of Buskerud County. 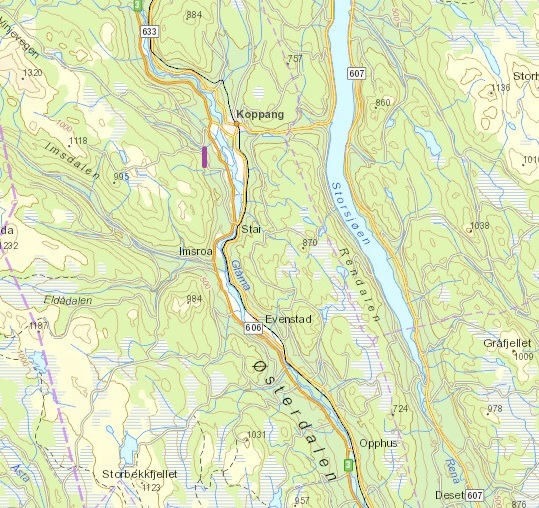 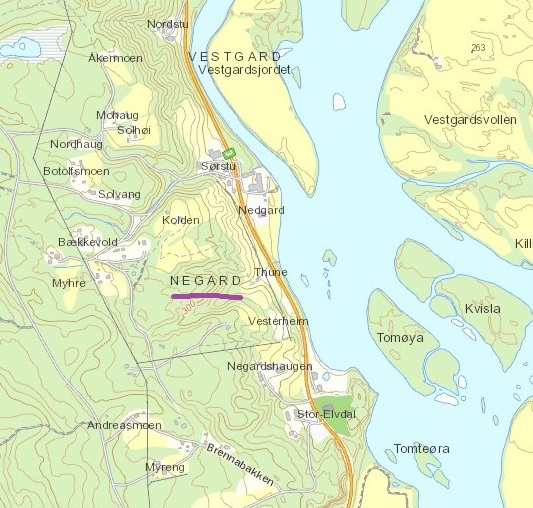 Closer view with farm identified on the map. North of Stor-Elvdal. 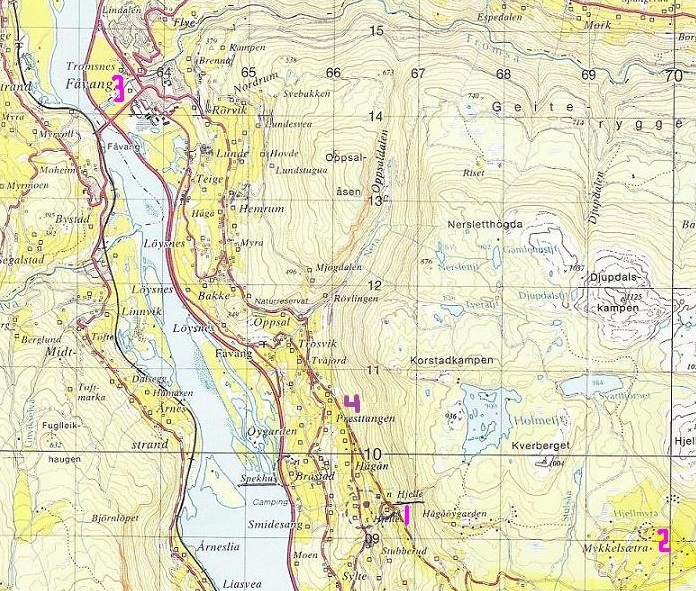 1. The Hjelle farm was located here. Only foundations of the buildings remain.

2. The Hjelle Seter (summer farm) located in the higher elevations. Bastina Hjelle was a Seter girl, she tended to the animals (cattle and/or sheep) at the summer farm.

3. The town of Faavang in Gudbrandsdalen Valley, Norway. 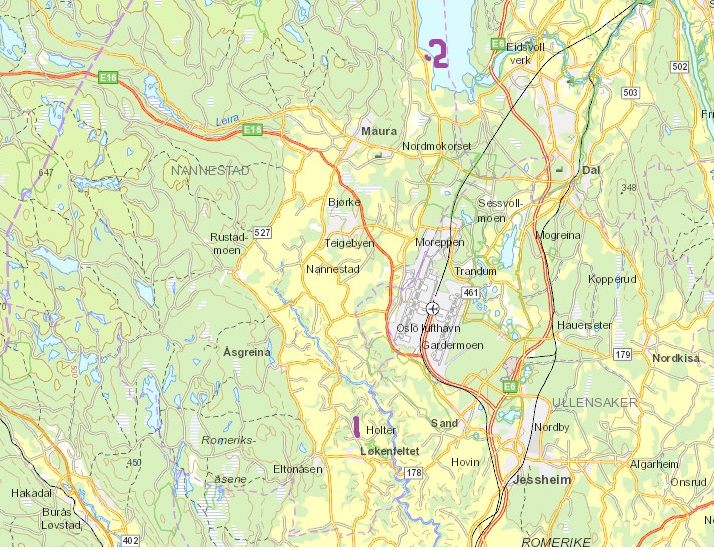 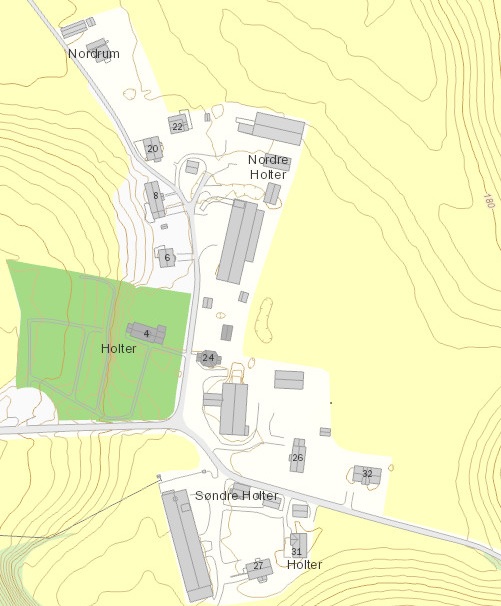 Holter Parish with Nordre Holter and Sondre Holter farms.
Family was from the Parish, but unkown which Holter farm. Green space has the Holter church. 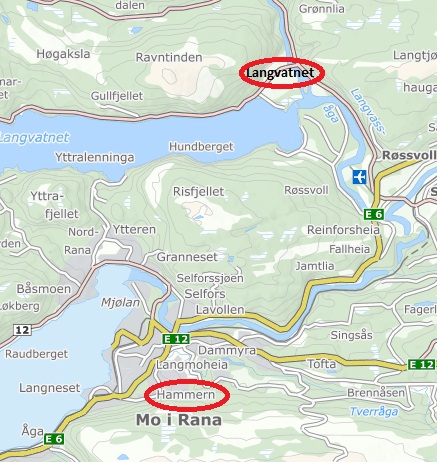 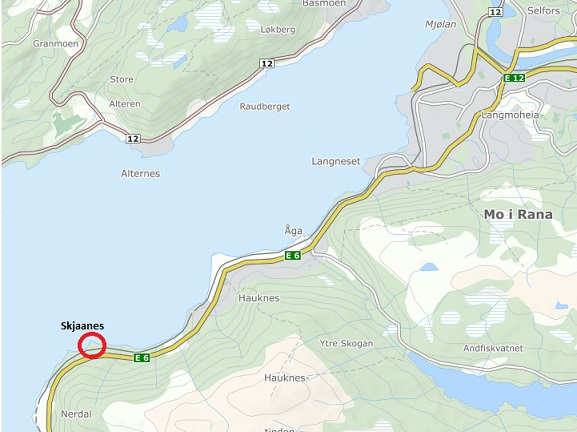 Immigrants Anders Jensen and his father, widower Jens Jorgen Zachariasen were from the Traethammer farm in the Mo region of Nordland. Both were listed in the 1865 and 1875 Norway census. The farm is currently known as Hammeren (aka Hammaren, Hammern). Anders changed his name to Andrew Johnson/Jenson. He and his father settled in Irving Township in the northeast part of Kandiyohi County MN. Many settlers in Irving Township were from the Nordland region of Norway and organized Nordland Lutheran Church in 1868. Andrew Johnson is buried in the Nordland Cemetery.

Anders' mother, Wilhelmine Amundsdatter, and her parents also lived at the Traethammer farm east of Mo i Rana, Nordland. Wilhelmine died when at the Sjaanes farm, later called the Skjaanes farm, about seven months after her son Anders Jensen/Andrew Johnson was born. There is no documentation that Jens Jorgen and Wilhelmine married. 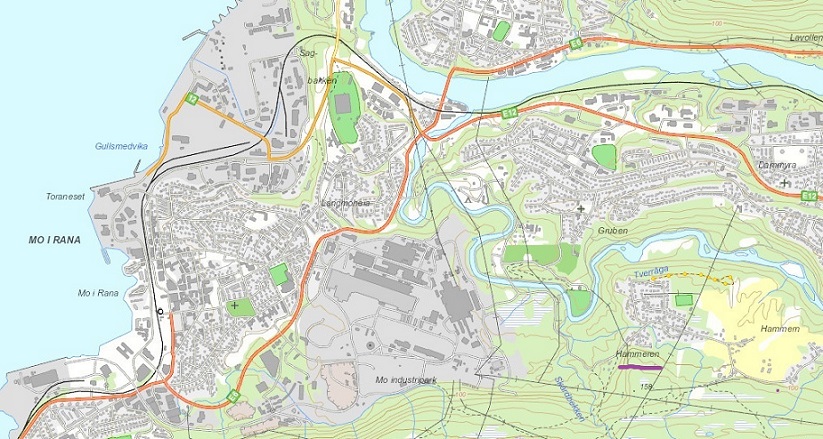 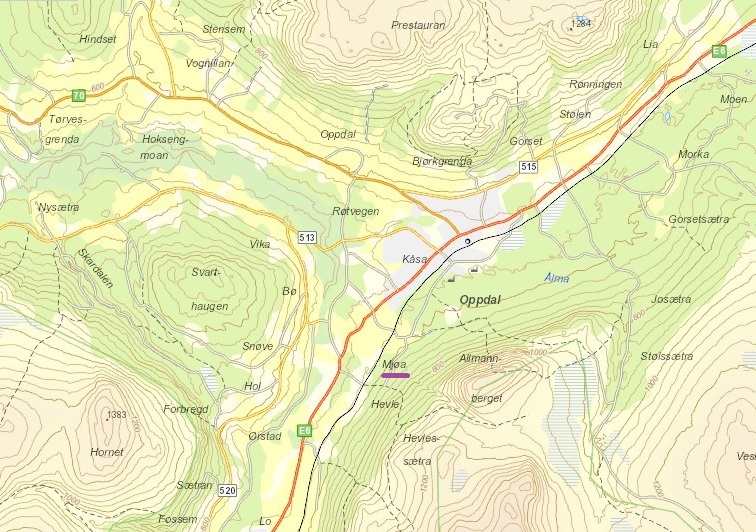 The Mjoen farm is southwest of Oppdal. 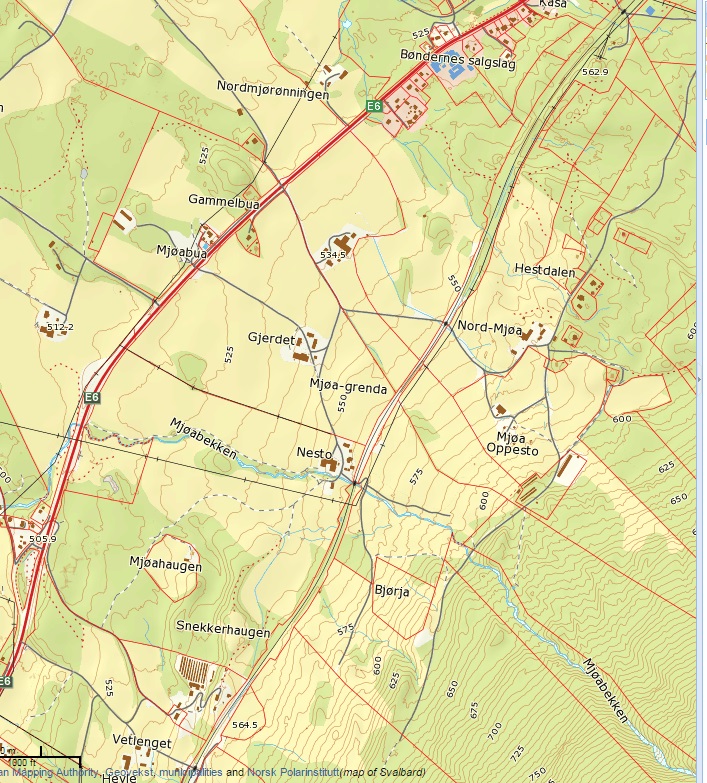 The Mjoen farm (now called Mjoa) is quite large and is divided into smaller sections.
The family possibly lived on the "Gjerdet" section of the farm.

Several generations of Ragnild's ancestors lived on the Mjoen farm (currently called "Mjoa" farm) located southwest of Oppdal. The 1801 Norway census lists about 15 families and 70 people on the farm. The 1865 census lists 90 people on the large farm. Ragnild's father Iver Olsen probably rented or leased his small section of the larger farm. Iver Olsen grew up on the Birke farm and when he married Guro Johnsdatter he took her farm name: Mjoen.