The second child of Johan and Johanna Mankell was Wilhelm August, born in Christiansfeld Denmark in 1803. Wilhelm was a carpenter, a trade he learned in Christiansfeld, like his older brother Carl Abraham. In about 1820 Wilhelm left Christiansfeld to join his father in Karlskrona Sweden. The family was in the Karlskrona Tyska parish (Karlskrona German Parish). By 1823 he had left Karlskrona and moved to Stockholm, the Klara Parish. Older brother Carl Abraham was the organist and cantor at Klarakyrka in the 1820s. In 1841 Wilhelm married Margareta Igelstrˆm in Stockholm. The couple had 4 children, all born in the 1830s in the Klara Parish in Stockholm. (Published information lists Gothenburg as the birth place.) With information from Swedish church records, here is chronology of the places they lived and events in the lives of the family. 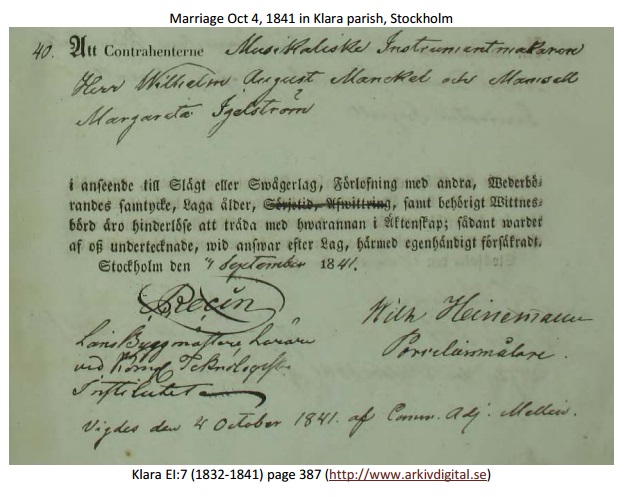 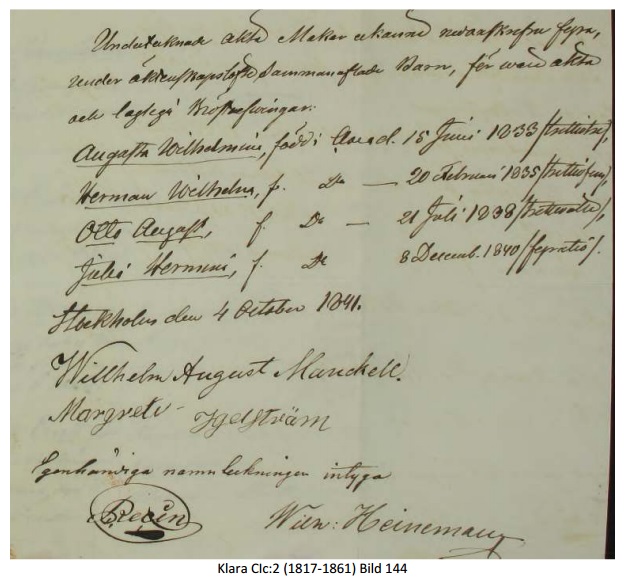 This document, signed by Wilhelm and Margareta on their wedding day, is a recognition made by both parents to their children.
It states that the children are genuine and lawful heirs.
(Image and translation courtesy of Karl-Johan Augustsson)

Children of Wilhelm and Margareta: 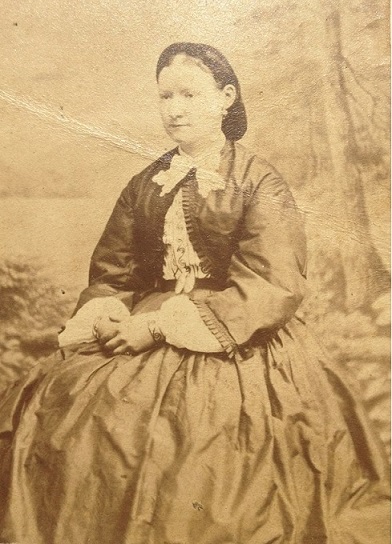 
Herman Wilhelm Mankell (1835-1889)
Wilhelm and Margaretaís second child was Herman Wilhelm (also known as HW), born in Stockholm in 1835 (Klara Parish). In 1841 the family moved to Vadstena; in 1849, to Gothenburg. In 1857 HW and his wife Elisabeth Olson/Olofsdotter married, left Sweden and set sail for the US, arriving in New York City and were in Northfield, Minnesota by 1857. They homesteaded the farm in Kandiyohi County, Minnesota in 1864, and are my great great grandparents. Separate web pages are devoted to HW, Elizabeth, and their descendants.

Otto August Mankell (1838-1885)
Otto August (commonly and professionally referred to as OA Mankell) was born in Klara parish, Stockholm in 1838 and lived most of his life on Lidingˆ Island near Stockholm. He was an artistópainter and lithographeróand architect. (Several published biographies incorrectly list his birthplace at Gothenburg.)

Julia Hermina (1840-1927)
Their fourth child was Julia Hermina, born 1840 in Stockholm and died in 1927 in Gothenburg. Like her older sister Julia was a music teacher in the Gothenburg area. Hulda Mankell (daughter of HW and Elizabeth) corresponded with ìTante Herminaî and many of these letters are in Jane Hauser Pejsaís written history about her grandparents, Hulda and Hans Melgaard.