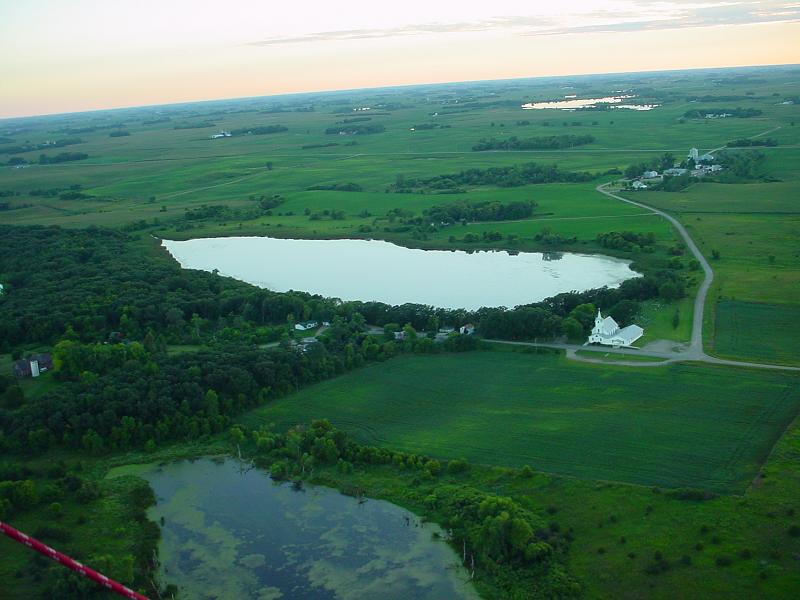 Aerial view of Arctander Township in 2005, looking west (and a bit southwest).
In the middle is the unincorporated hamlet of Jericho (also called Norway Lake) and East Norway Lake Lutheran Church.
The border of Arctander and Lake Andrew Townships is in the foreground.
The Christopherson homestead is in the background, upper left of center: the grove of trees
with light colored buildings to the left of the grove.
Photo courtesy of Kurt Mankell. 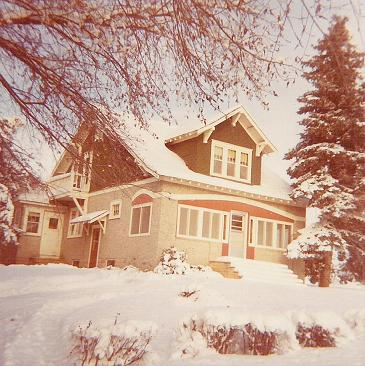 Christopherson homestead, c1970. Second (and current) house on the farm, built in 1927.
There is a separate web page with the homestead documents. 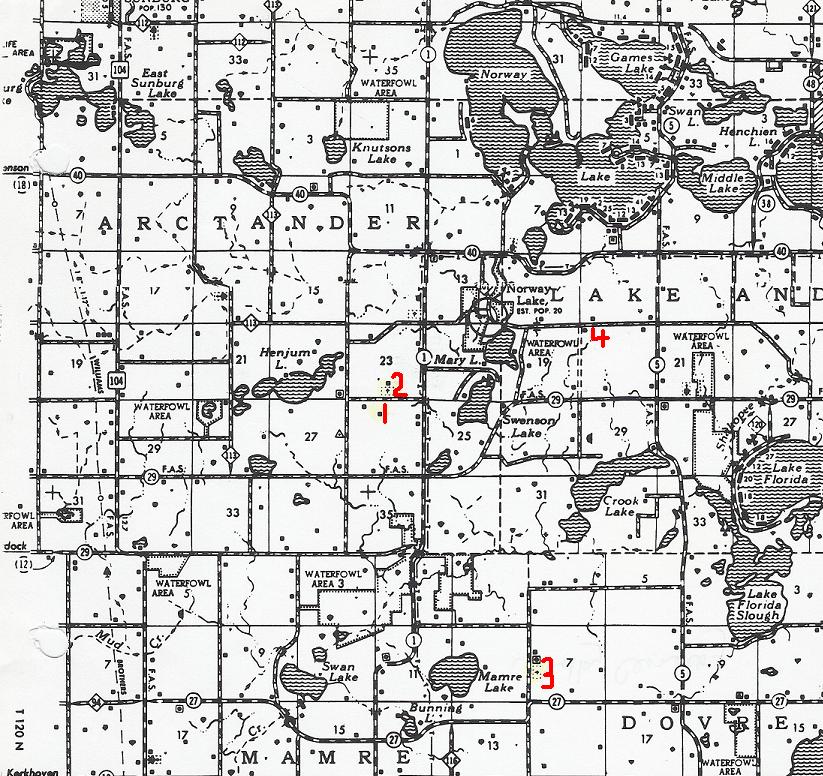 The Christopherson family is originally from the Nannestad and Ullensaker areas of Norway, north of Oslo. August (1863-1906) was born in Nannestad. His father, Lars Christopherson (1828-1925) was born in Holter (Ullensaker township), He was baptized at the Holter Church. Lars was a teacher in Maura (Nannestad township) Norway. He married Anna Olson Tangen, (c1844-1886), who was from Tangen, just north of Maura. (see maps). Lars grave marker lists his birth year as 1827, but church records in Nannestad state the year as 1828. His sister Anne was born in 1827.)

When referring to the Christopherson ancestors from Norway, who then moved to Arctander, there often is confusion because they also used the Holter name. In Norway people often take the name of the location (usually a farm) where he/she lives. Because the Christopherson family rented a building on the Holter farm (which was next to the Holter Church) they were also known as Holter. 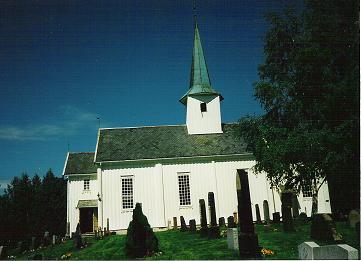 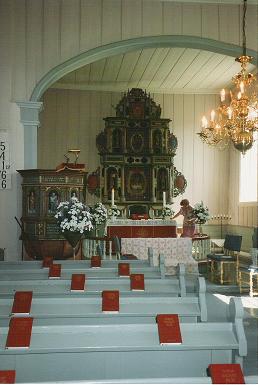 Interior of Holter Church, where Lars Christopherson was baptized.
A 1995 photograph.

Lars and Anna Christopherson and their children emigrated from Norway in the spring of 1868 on the sailing ship "City of Washington" which arrived in New York on May 13, 1868 from Liverpool England. They had 4 children by 1868: Carrie, Olai, August and Anne. The manifest lists the family (nos. 278-283) as "Christoferson" and the children as Karen, Olie, Auguste, and Anne. According to a Stene article, the family initially "landed at the railroad terminal, St. Cloud, where he met a Mr. John Sandvik, who brot them to the Lake Johanna colony. It did not suit his fancy so he came over to the Norway Lake colony where he found himself at home."

"City of Washington" Ship Manifest, identifying Lars, Anne and children on the May 1868 voyage.


The family traveled to Arctander Township, first living in a sod house. They settled on their homestead in Arctander Township in 1869 (indexed as Lars Kristofferson with the Bureau of Land Management records), having filed their papers in the Litchfield Land Office. On this farm in Section 26 (Homestead Entry # 2574) Lars built the first wooden house on the property. Lars and Anna had three more children, born after arriving in Arctander Township: Julius, Christine and Lewis. The homestead has remained in the Christopherson family, later farmed by Lars' son August, then August's son Otto, and now by Otto's son Alloys and his wife Diane.

In Norway Lars was educated to be a teacher, which included religious instruction. In August 1868, shortly after arriving in Arctander Township, Lars Christopherson (aka Lars Christopherson Holter or Lars Kristofferson) was hired as teacher for the Norway Lake Lutheran congregation. At this time there was no church or school building for the congregation; worshipers and students met in homes. (The log church was finished in the fall of 1868.) The parochial school met in the home of Thomas Osmundson on the south side of Norway Lake. Norwegian was spoken in the classroom and studies included reading, writing and religion. 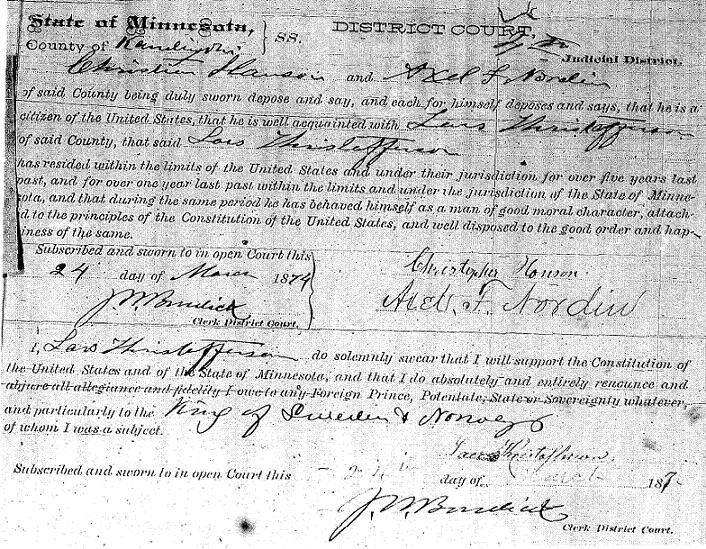 Lars became a citizen of the United States on March 24, 1874.
And by derivation his wife and young children also became citizens.
Witnesses were Christopher Hanson (C.H. Engen) and Axel F. Nordin. 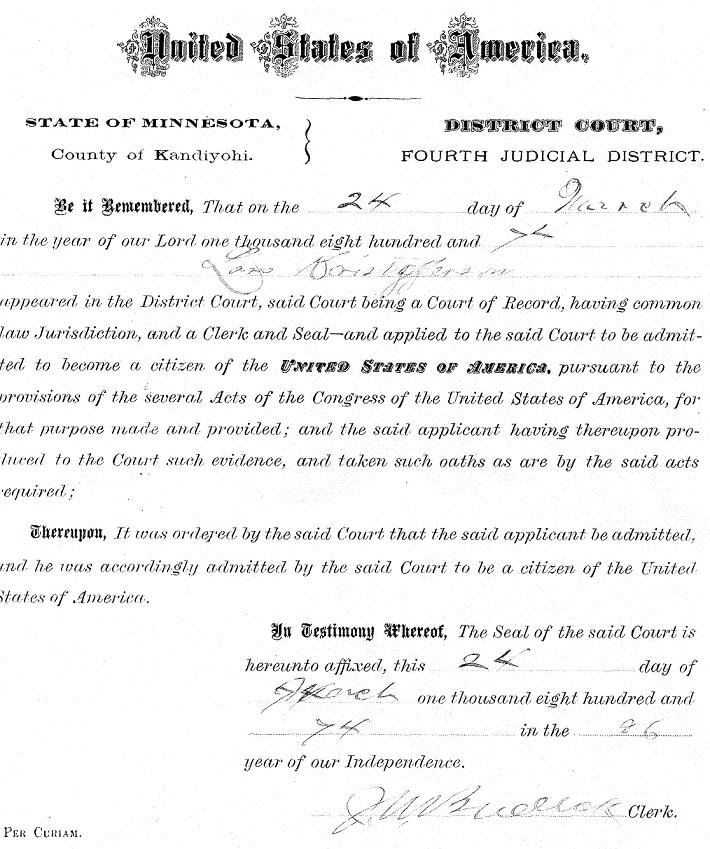 Certificate of citizenship which Lars filed with the U.S. Government Land Office to receive his homestead.
Document at National Archives, Washington DC.

Lars and Anna were parents of 7 children: 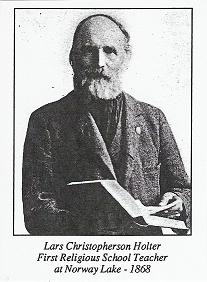 In 1872 School District 56 was established in Norway Lake Township, (later known as Arctander Township). The district included sections 22-27, 34-36. The local school board met in 1873 and determined that the school term would last for 3 months; the first term commenced on June 4, 1874, in a room at the John Edman home, with teacher Lizzie Wright. In 1875 a 16 x 20 foot schoolhouse was built in the SW corner of the NE 1/4 of Section 26, which was the southern edge of the Christopherson homestead. An addition was added in 1893, and in 1902 a new schoolhouse was built, 22 x 38 foot with a belfry. The school closed in the early 1960s following consolidation with New London District 345. 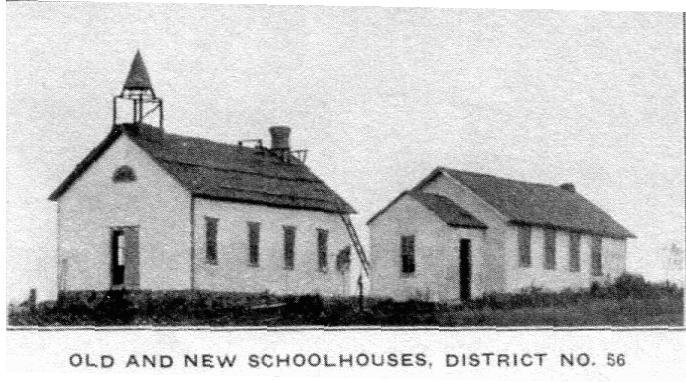 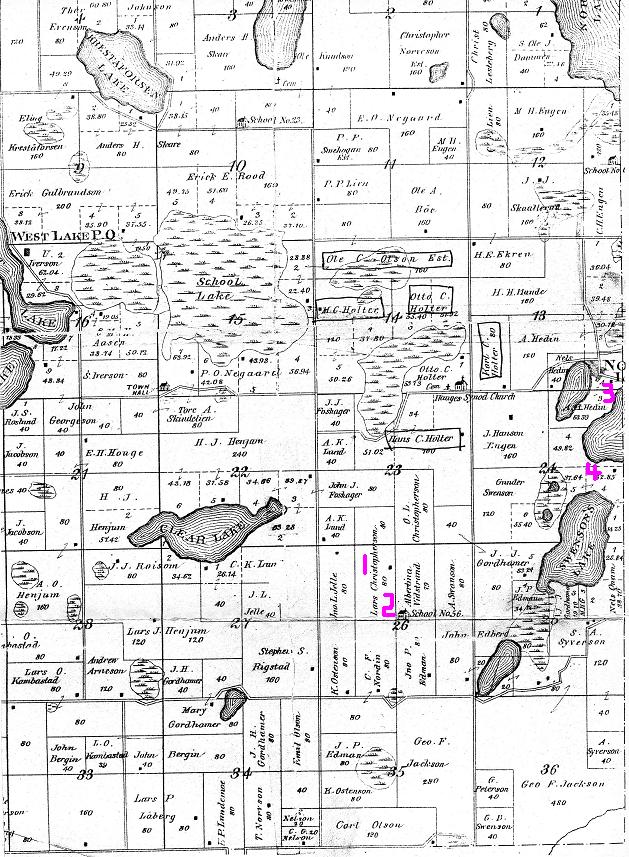 Anna Christopherson died in March, 1887. She had been ill for about ten years and bedridden for three due to rheumatism. Lars continued to live on the homestead until his death. In 1910 he was living on the farm with his widowed daughter-in-law, Bastina, and her children. By 1920 Lars still owned the farm and continued to live there with Bastina and four of her children: Otto, Ellen, Millie and Cornelia. Grandson Otto rented the farm. Lars died in 1925; here is his detailed obituary. Lars and Anna Christopherson, are buried in the Lundby Cemetery in Dovre Township, south of the Christopherson homestead. 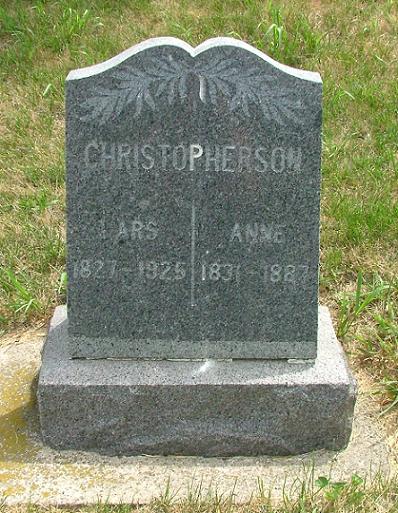 
Pioneer Norwegian settler, Gabriel Stene, wrote stories about pioneer settlers which appeared in 1925 issues of the Willmar Tribune. Stene wrote about Lars Christopherson and Lars' sister, Anna Olson, and their experiences as immigrants and settlers in Kandiyohi County.

In 1985 Orlynn Mankell wrote an article about a Pioneer Woman and her family, who traveled from Norway to Arctander Township. This article is about the sister of Lars Christopherson, Anne Christopherson Olson.

There is a separate web page regarding the children of August and Bastina. 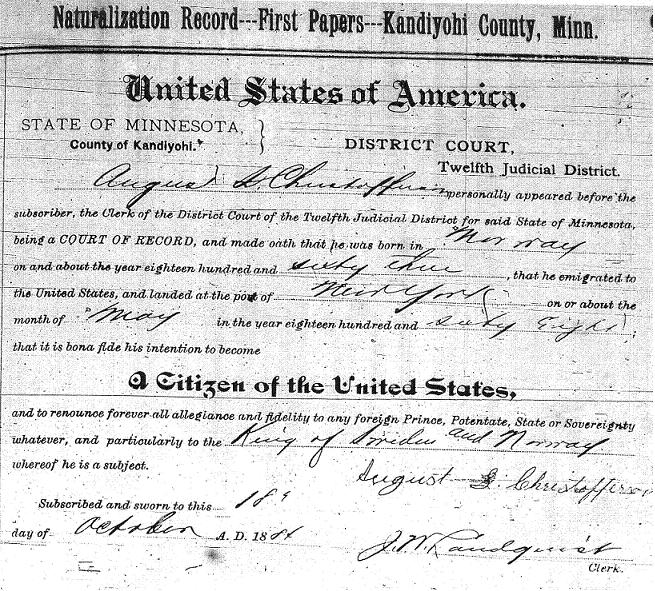 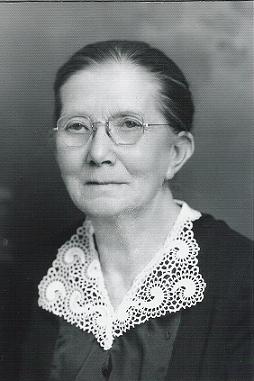 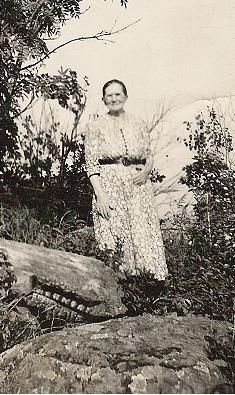 
Bastina and August are buried at the Church of God Cemetery across the road from the Christopherson homestead. Both lived most of their lives on the homestead. August died from pneumonia in 1906 (age 43) at his home, leaving Bastina a widow for many years before her death in 1944. Bastina lived her last 6 years in Willmar, MN.

Here are the obituaries for August Christopherson, which was in the April 11, 1906 issue of the Willmar Tribune, and for Bastina Christopherson (Sept 14, 1944 issue):

AUGUST CHRISTOPHERSON DEAD
This week it is our duty to report the death of August L. Christopherson, of town of Arctander, which occurred at his home on Saturday, April 7, about noon. The cause of death was pneumonia. The deceased leaves a wife and seven children to mourn his sudden departure, besides an aged father who has made his home with the deceased for a number of years, two brothers--Olai and Louis Christopherson--and two sisters--Mrs. N N. Abrahamson of Mamre and Mrs. Ed Evenson of Willmar. The grief stricken relatives have the sympathy of the entire community. The funeral will occur Tuesday, April 10, and the remains will be laid to rest in the "Church of God" cemetery, located on the deceased's farm.

MRS. B. CHRISTOPHERSON
Mrs. Bastine Hjelle Christopherson was born August 12, 1870 in Gudbrandsdalen, Norway. She was taken ill on August 22, last and passed away on August 29, thus attaining the age of 74 years and 17 days. She came to this country with her parents, from Norway, at the age of 17 years and settled in Kandiyohi County. In 1888 she was united in holy matrimony to August L. Christopherson, who preceded her in death in 1906.

To this union three sons were born into the family: Otto at the home farm, Julius of Minneapolis, and Eddie of Syracuse, NY and four daughters, Anphia (Mrs. Elmer Myhre) of Sunburg, Ellen (Mrs. Herman Landquist) of Minneapolis, Millie (Mrs. E. L Bergan) of Minneapolis and Cornelia (Mrs. Herman Mankell) of New London. All were present at the funeral. Two brothers, Matt and Ole Hjelle of New Folden and one sister, Mrs. T Thompson of Pelican Rapids, also survives. There are 16 grandchildren and three great grandchildren, as well as a host of other relatives and friend, who deeply feel the loss of a true Christian, mother, and friend.

She was converted while a young woman and lived a true Christian life all these years. She as a faithful member of the Church of God and was a true believer in the Bible. Her prayer was that we shall meet in Heaven.

Funeral services were held Saturday afternoon, September 2, at 2 o�clock from the Church of God in Willmar, with the Rev. Shields officiating. Several songs were sung. Burial was in the church cemetery in Arctander Township. One selection, �Sweet Bye and Bye�� was sung at the grave by the church quartet. Pallbearers were the three sons, Otto, Julius and Eddie Christopherson, and the three sons-in-law, Herman Mankell, Elmer Myhre and Herman Landquist.

Those from a distance in attendance included Ole Hjelle, Mrs. Melvida Nelson, John L. Johnson of New Folden, Matt Hjelle of Argyle and Mr. and Mrs. Carl Hjelle of Stephen.Gifts to missions in her memory amounted to more than $115. There was a great profusion of beautiful floral offerings, gifts from relatives and friends, attesting to the high esteem in which Mrs. Christopherson was held by all who knew her.

Mr. and Mrs. Christopherson spent their years together on their farm in Arctander, and she continued living there after her husband�s death until six years ago, when she moved to Willmar to spend the sunset of her life. Peace be to her memory. 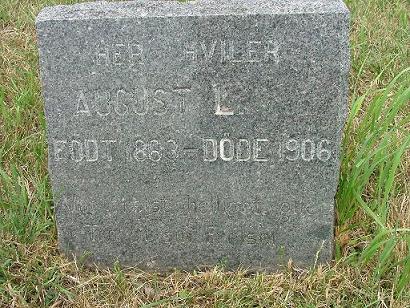 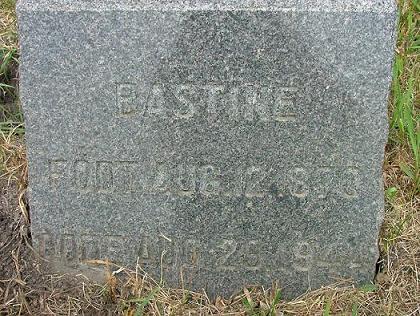