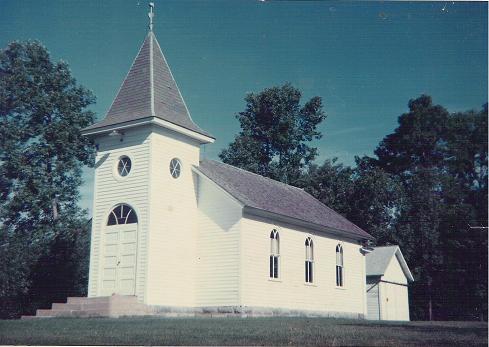 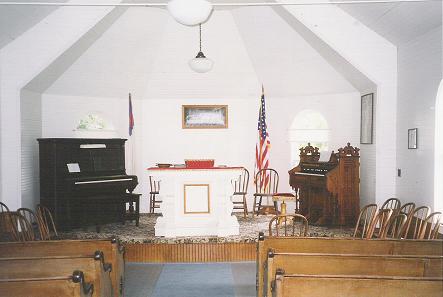 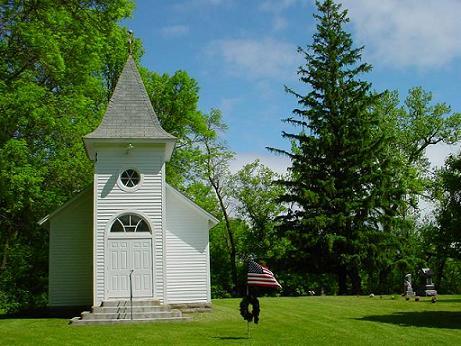 Lake Florida Mission Church, 2005, with a portion of the cemetery.

With these words Orlynn Mankell opened the Homecoming Services of the Lake Florida Mission Church, held annually on the first Sunday of August. Former members, descendants of former members, and neighbors come together to worship and keep alive this small, humble church, located 1/2 mile east of the Lake Andrew Town Hall on County Road 29. The congregation began in 1870 when several Swedish settlers gathered at the home of J. A. Skoglund on the north side of Lake Florida and formed "The Swedish Evangelical Lutheran Church of Lake Florida", a member of the Augustana Synod. Three years later the church was built. The original building was 20 feet X 30 feet, with walls 12 feet high. HW Mankell and John Lungstrom were the “leading architects” of the building, according to local historian Gabriel Stene. By 1878 a schism occurred within this congregation revolving around the doctrine of redemption (which also affected other congregations). The division over the Waldenstrom doctrines resulted in the resignation of the pastor (Rev. Hedeen) and the severed connection with the Augustana Synod and the Lutheran church. In 1879 the congregation transferred its membership to the Mission church when their new pastor, C.M. Youngquist arrived.

One of the more well known pastors was Rev. Nels Frykman who served the congregation for 17 years (1890-1907). Described as a good preacher, deep thinker and philosopher, he was also a poet and singer. He composed (words and music) several songs in Swedish; many have been translated into English. One of his most beloved by the Mankell family has been "I Have a Future All Sublime" (1883) which was sung (one verse in Swedish) at the funerals of Orlynn and Vivian Mankell and at the annual homecoming services. It was a favorite of my grandfather, Herman Mankell.

I have a future all sublime,
Beyond the realms of space and time,
Where my Redeemer I shall see,
And sorrow nevermore shall be.

The congregation dissolved in 1955 due to a small number of members; most of the people then joined the New London Mission Covenant Church. A perpetual care fund began in 1961 and is used for the ongoing upkeep of the church and cemetery. The site is governed by a Church Association. 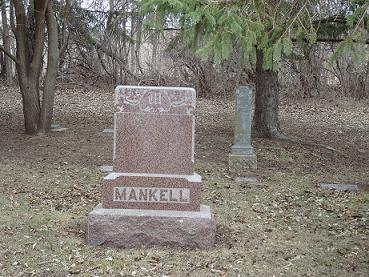 Many generations of the Mankell family have been a part of the congregation. In a 1929 article in the Willmar Daily Tribune, historian Gabriel Stene lists the following families as charter members: Lungstrom, Ahlberg, Skoglund, Rodlund, Nord, Nygren, Elliassen, Hedin, Danielson, Warholm, Blom, Brattlund, Norman, Mankell, Schedeen. HW and Elizabeth Mankell worshiped at this congregation, followed by Oscar and Minnie Mankell, Herman and Cora Mankell. All are buried at the church cemetery. Elizabeth's sister (Mathilda Widdich, d1914) is buried next to the Mankell plots. Orlynn and Vivian Mankell were involved in the Church Association and the ongoing upkeep of the building and grounds. Both participated in the annual service; Orlynn was the service leader; Vivian and Orlynn sang in the choir; Vivian helped prepare the lunch which followed the service. Children of brothers Orlynn and Sherman Mankell have participated in the annual August homecoming services. In 1998 Orlynn Mankell wrote an unpublished essay about this congregation founded by Swedish immigrants. 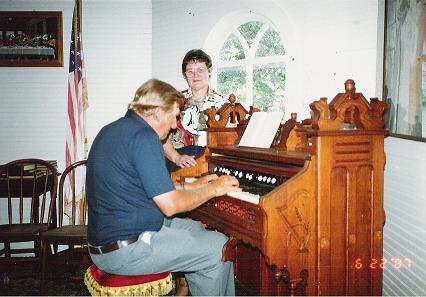 "we did not meet there in the winter because it only had a wood burning stove. I still remember having very cold feet! We met in homes during these colder months. The pastor (from Minneapolis) stayed in area homes when he came. We would meet him at the train station in Willmar, when it was out turn to have him for the weekend. I remember very well the singing there. I am sure the old hymns 'floated down' as far as the Larson farm (across County Road 29)! I can still hear them sing 'The Old Rugged Cross'--sometimes accompanied by the piano and organ!

Marlys Mankell Schilz, sister of Marjorie and Orlynn, wrote about one of her memories regarding this small country church:

The gravel crunched under the balloon bicycle tires as I rode down the country road. I could feel the hot sun baking my back, the taste of dust and grit when an occasional car drove by. I turned into the driveway and saw my destination at the end -- a small white country church nestled in a grove of trees with the traditional cemetery along side. The long driveway stretched ahead like train tracks, two narrow paths with grass overgrown in the middle and along the sides. I stayed in the right lane, out of the way of oncoming traffic, I suppose.

I could feel the weeds stinging my ankles and tried to pedal with one leg. Preoccupied with this dilemma I barely noticed the strains of music. As I got closer to the church, the organ music was there all right. It was LOUDER. I looked for a car -- none. Bicycle? -- none. The single entrance/exit was closed. I walked around the cemetery for awhile which was not exactly comforting. I recalled what my mother would say, "It's the live ones you have to be afraid of." I walked up the front steps to the church door. I hesitated as I placed by hand on the door handle. Suppose the forlorn ghosts were practicing their music lessons. Suppose I would see the organ keys play by themselves. I swore off late night horror movies.

Finally I gathered enough courage and opened the door. As my eyes adjusted to the darkness, I could hear a familiar voice. "What are you doing here?" I asked the same question. My friend from childhood answered, "Sometimes I walk over here and play this old pump organ. My grandmother was the organist here for many years." We chatted, but just for a bit. We each came seeking solitude, and each wanted to preserve it. The Skoglund Family web site has information about the Skoglund family's connection to the founding of this congregation.

Plat Maps which include the location of the church