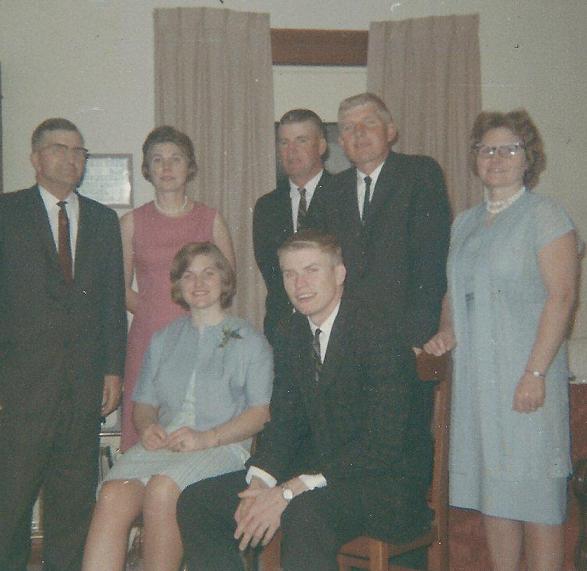 There is a separate web page for Orlynn and Vivian Mankell. 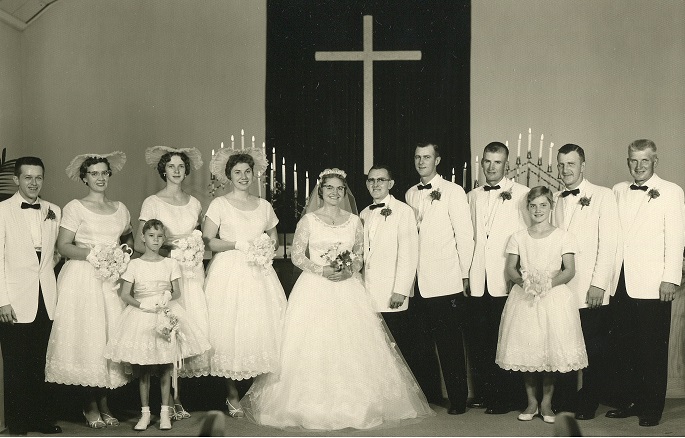 Marjorie was a graduate of St. Cloud State University with a Bachelor of Science degree. She taught in the public schools. Bill was a graduate of the University of Minnesota and worked as a data processor; his last position was with Mayo Clinic in Rochester. They have lived in St. Paul MN, Wahpeton SD, Fargo ND and Rochester MN. They have three children and 4 grandchildren.

Marge died on April 2, 2016, with funeral services at the Rochester Covenant Church on Friday, April 8. The Rev. Joel Johnson officiated. His grandfather Rev. Jerry Johnson married Marge and Bill in New London 57 years ago. And he attended the funeral. Here is her obituary printed in the West Central Tribune.

Marge was born at home on August 6, 1929, on the Mankell family homestead near New London, Minnesota, to Herman and Cornelia (Christopherson) Mankell. She was confirmed in the Christian faith on Pearl Harbor Day, December 7, 1941, at the Lake Florida Swedish Mission Church. Marge attended rural school and finished high school in New London, later graduating from St. Cloud State University. She taught elementary school in Clara City, Montevideo, Roseville, St. Louis Park, and Alexandria. Over one summer break, she pursued her Great Adventure: a two month solo trip around Europe, with just an overnight case. Marge married Bill Larimer on August 2, 1958, and after raising her family she was a substitute teacher for many years. Marge always made guests welcome at her home. She was a member of Rochester Covenant Church and several Covenant ministries, and enjoyed time with family, painting, traveling and camping, and hiking outdoors.

Marge resided in Rochester for 46 years, and spent her final years at Cottagewood before finally succumbing to complications from Alzheimer's Disease.

Marge was preceded in death by her parents Herman and Cornelia, brothers Dale and Orlynn, sisters Mary Ann and Marlys, and grandson Nehemiah. She is survived by her loving husband of 57 years, Bill; sons Grayson (Joy), Kayne (Emily), and William; brothers Sherman (Bette) and Rev. Douglas (DeAnn); and three grandchildren: Kendra, Sarah (Mason) and Caleb. We will miss her company, kind heart, and gentle spirit.

Visitation will be Thursday, April 7, from 5:00 p.m. to 7:00 p.m. at Ranfranz & Vine Funeral Home in Rochester. Funeral services will be Friday at 10:30 a.m. at Rochester Covenant Church, with luncheon following. Interment will follow at Ft. Snelling National Cemetery. Memorials may be directed to the camp scholarship fund at Rochester Covenant Church. Her family also wishes to thank the caring staff at Cottagewood and Heartland Hospice.

Here is the text to a song written and sung by her son, Grady Larimer, at the funeral service. The song makes reference family heritage; the community of Jericho, only 2 miles from the farm; to Marge's great-grandfather, Gunder Swenson in 1862; and to Bill Larimer's grandfather in Hollandale MN.


Sherman and Bette live and farm on what was the Alvin and Edna Halvorson farm, 1.5 miles from the Mankell homestead. 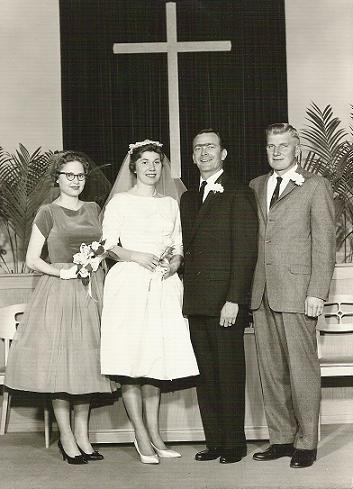 Mary Ann received a Bachelor's degree in liberal arts with an emphasis in writing from the University of Minnesota and worked for many years as a medical technician in San Diego. Jim graduated from the University of Washington and was an architect. They lived in San Diego in a home designed by Jim. Mary Ann was a nature lover and a member of the Sierra Club. She loved the arts, especially theater and opera. An avid reader, Mary Ann participated in a book club for more than 30 years. Mary Ann was also involved with her church, Grace Lutheran, in San Diego. After their divorce Mary Ann continued to live in the home until she retired and moved to Seattle WA in 2003 to be near her 2 children and 4 grandchildren. She wrote a short story about a summer day at the farm. Mary Ann died in 2004.

Here is Mary Ann's obituary, published in the April 11, 2004 issue of the San Diego Tribune

Mary Ann Petteway, devoted mother and grandmother, nature lover and supporter of the arts, passed away on Sunday, April 4, in Seattle, Washington, in the presence of her beloved children.

Born October 7, 1937 in New London, Minnesota, Mary Ann grew up on a farm with her three brothers and two sisters. After graduating for the University of Minnesota with a Bachelor's degree, Mary Ann moved to San Diego, Ca, and married James Elliott Petteway, architect, in 1962. They lived in Mission Hills in a home designed by her husband, and had two children, Jason and Elizabeth. Mary Ann earned her Master's degree in liberal arts with an emphasis in writing. During her 43 years in Sand Diego, Mary Ann worked as a medical technician for Sharp Hospital, UCSD Medical Center, and the American Red Cross before retiring in 2003, when she moved to Seattle to be near her family.

Mary Ann traveled extensively and was an active member of the Sierra Club. She was very involved in her church, Grace Lutheran, where she found such comfort. She was an enthusiastic reader and participated in a bookclub that has met consistently for over 30 years, and she loved theater and opera and was a subscriber and donor to both for decades.

She will be remembered lovingly by her immediate family: son Jason Petteway and daughter-in-law Teddie; daughter Elizabeth (Petteway) Detels and son-in-law Clay Detels and four grandchildren: Cole, Greta, James and Lillian (All residing in Seattle, WA) She is also survived by her sister Marge (and BIll) Larimer, brother Sherman (and Bette) Mankell, brother Douglas (and DeAnn) Mankell, step-children Sue, James, Corbett and Nora, numerous nieces and nephews and many loving friends. 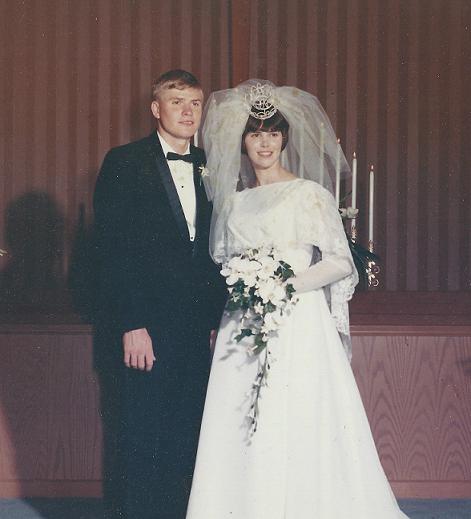 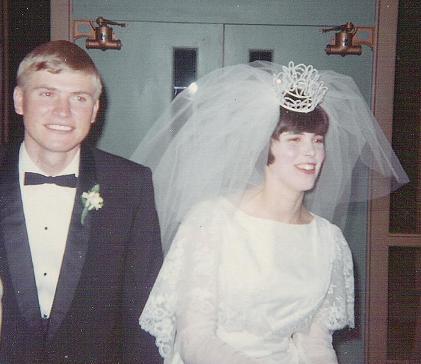 Informal photo from their wedding, September 2, 1967

Doug graduated from Bethel College in St. Paul MN. He attended seminary at Fuller Theological Seminary (Pasedena CA) and North Park Theological Seminary (Chicago IL). He was ordained a pastor in the Covenant Church and served congregations in Illinois and Nebraska. Later he became a pastor of the Presbyterian Church (USA) and served a congregation in St. Louis MO. In 2013 he retired as senior pastor at Calvary Presbyterian Church in Logansport IN.

DeAnn is from Salina Kansas. A nurse, DeAnn retired in 2013 as an inspector of nursing homes in the northwest area of Indiana. Doug and DeAnn have 2 daughters and 4 grandchildren.

Dale was born with health problems and lived only 15 months. His eight-year-old sister Mary Ann helped her mom Cora by watching over her little brother, carrying him around the house and farm. Here is Dale's obituary:

Funeral services for Dale Herman Mankell were held Wednesday afternoon, October 9, at the Lake Florida Mission Church, with the Rev. Theo. J. Paulson of Minneapolis officiating. A duet "In the Garden" was rendered by Mrs. Roy Edman and Mrs. Bennie Edman. The pallbearers were Wayne Railson, Kenneth Korsmo, James Carlson and Sherman Mankell. There were several beautiful floral tributes as well as memorial gifts.

Little Dale was born July 5, 1945 and was baptized March 10 of this year. He died on October 8, after a lingering illness, at the age of one year and three months. He is survived by his parents, Mr. and Mrs. Herman W. Mankell, three brothers, Orlynn, Sherman and Douglas, and two sisters, Marjorie and Mary Ann. Also mourning his untimely death are his grandmother, uncles and aunts. 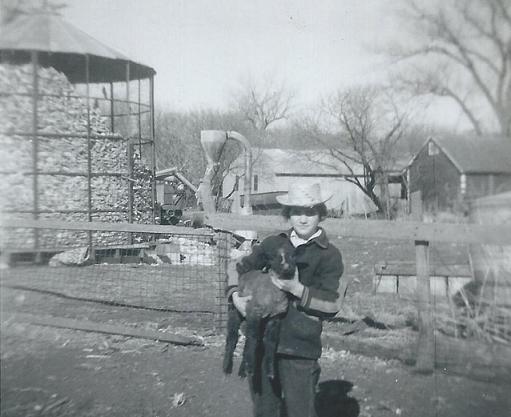 Marlys excelled at sports, especially softball. One can only imagine what she could have done if Title IX had existed when she was in high school and college. She could throw the softball so high in the air it was the tiniest dot in the sky for someone (sometimes me!) to catch in its descent. She could hit the ball over the farm's buildings. 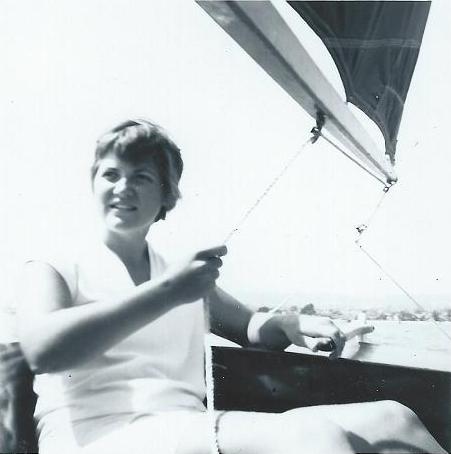 Marlys sailing in San Diego (on a boat with Mary Ann and Jim Petteway), summer 1964

An occupational therapist, Marlys graduated from Bethel College in St. Paul. In 1977 she married Gerald Schilz in Las Vegas NV. Jerry was a deputy sheriff of Hennepin County and later a realtor for the Bloomington MN area. They lived on Lyndale Avenue in Minneapolis and later in Bloomington MN. They had 3 children.

Marlys suffered from a lengthly illness which began in about 1993. As she faced her illness which left her increasingly immobile, she grew in her spirituality. She wrote a journal about her spiritual journey and acceptance of her illness. And she wrote stories about her life growing up on the farm. Marlys died in 2001; Jerry died in 2002. Here is Marlys' obituary, published in the West Central Tribune, January 10, 2001

Marlys E. Schilz, 53 of Bloomington, formerly of New London, died Monday. Her funeral will be at 11 a.m. Thursday at Church of the Nativity of Mary, 99th and Lyndale Ave.S, Bloomington. Visitation will be 5 to 8 pm today at Gill Brothers Funeral Chapel and one hour prior to services at the church.

She was born June 7, 1947, in New London to Herman and Cora Mankell. She is survived by her husband Jerry; children Geoff Schilz, Sean Schilz, Coral Schilz; sisters Mary Ann Petteway, Marjorie (and Bill) Larimer; and brother Doug (and DeAnn) Mankell, and Sherman (and Bette) Mankell. She was preceded in death by one [sic] brother.