PENNOCK — There’s a long view to the east and south from the doorway of Al Christopherson’s machine shed, with a mix of oak trees, corn and soybean fields and wetlands extending for miles from his rural Pennock farm. Christopherson is looking forward to taking in that view a bit more after he leaves his post as president of the Minnesota Farm Bureau in November. He’s held the top job in the state’s farm advocacy organization for 17 years. Combined with a 10-year stint as vice president and serving on the state board of directors before that, Christopherson has held state leadership positions for 30 years.

A friend reminded him that he’d been involved with Farm Bureau for more than a third of the life of the 86-year-old organization. He shakes his head at that, with a “where did the time go” look on his face. “I’ve been around a long time,” said Christopherson, who is the longest-serving president of the Minnesota Farm Bureau. The time went to speaking out for — and with — Minnesota farmers on a state, national and even international level. A sample of issues includes a proposed state tax on fertilizer; the national issue of land being taken by eminent domain for private development; and international trade agreements for farm commodities.

Christopherson, in his role as president of the Minnesota Farm Bureau, has traveled to St. Paul, Washington, D.C., and more than a few foreign countries to discuss, debate and try to persuade decisionmakers on those, and other issues vital to agriculture. 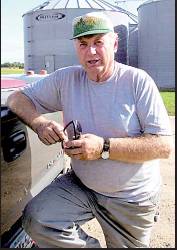 Al Christopherson, past-president of Minnesota Farm Bureau, talks about his
30-year stint in leadership roles with the state farm organization on his farm in rural Pennock.
Tribune photo by Carolyn Lange

A modest man
Christopherson, 64, grimaces when asked about his successes with Farm Bureau. “I’m just a spokesperson for the organization,” he said. He’s simply carrying out the policies established by the Farm Bureau delegates that are fine-tuned by the organization’s staff, he said. Bob Shepard, chief administrator for the Minnesota Farm Bureau, laughs at Christopherson’s definition of his role as president.

“He’s downplaying his importance,” said Shepard. With the help of his “great sense of humor,” Shepard said Christopherson uses his skills to “understand people, to work with people, to listen to people who disagree and get groups of people to come to consensus.” He will definitely be missed at the state office, said Shepard. That sentiment is echoed on the national level.

Christopherson even draws high praise from the Farmers Union, which is oftentimes on the opposite side of Farm Bureau on ag policy and government issues. Dave Frederickson, the former president of the Minnesota Farmers Union and the current national president, said Christopherson’s “soft-spoken” attitude, dry wit and leadership “will be missed” and he’ll leave “big shoes to be filled.” Frederickson, who used to farm near Murdock — not that far from Christopherson’s farm, said the two were friends and neighbors and traveled together to farm events over the years, while supporting different points of view. “We turned a few heads,” said Frederickson, when people saw the two getting out of the same car. “I have a huge amount of respect for the work Al has done for farmers,” said Frederickson. “Al has provided great leadership over the years. He’ll be missed. I’ll miss him.”

No axe to grind
Christopherson said he had “no agenda and no axe to grind” when he became involved in state leadership roles with Farm Bureau. As a marketing and economics major in college, and an active farmer ever since, Christopherson said he had an interest in learning how the ebb and flow of agricultural economics worked, which led him to get involved with the organization.

During the years, Christopherson has worked with state legislators on a nonpartisan basis to develop numerous pieces of legislation that affect Minnesota farmers. Support or opposition of legislation supported by Farm Bureau — like the ethanol mandate — hasn’t been down Republican or DFL lines, but on a rural and metro split, he said. That shows the need for continued education and communication on farm issues, he said. During years of agricultural advocacy and listening to both sides of issues, Christopherson said it’s hard to have patience with people who “seem to have all the answers before they have the questions.” Most of the answers, he said, aren’t easy.

A major issue that will be affecting farmers in all 50 states is the Supreme Court ruling in a Connecticut case that allows government entities to use eminent domain to obtain land for private development. The American Farm Bureau Federation had argued against that case. The defeat means more work is needed to protect farmland located near metro areas from being taken for private development, he said. That kind of eminent domain policy has already been used in Minnesota, said Christopherson, who cited the case of Best Buy acquiring land owned by a car dealership whose owner didn’t want to sell. He said Minnesota is the “poster child” for this type of eminent domain issue and there’s a fear that Minnesota farmland could be taken in a similar fashion unless changes are made. “It’s a huge issue,” he said. “It was kind of a wake-up call for farmers who are pretty concerned about their land and their right to own land,” said Christopherson. It’s also an issue that has “galvanized” the Farm Bureau membership, but one that will likely be fought by Christopherson’s successor, who will be elected Nov. 21. “There’s other people who can lead the organization,” he said.

A working farmer
Christopherson, wearing jeans and a T-shirt dirty from the day’s work of getting a tractor ready for fall field work, gives long, thoughtful answers to questions about his time with Farm Bureau. His only goal as president was to “give it every bit of effort I have.” Whether he was a successful president or not, is for “others and time to decide,” he said.

The fact that he’s still actively farming, even though his responsibilities took him out of town, out of state and out of the country for days at a time, is a testament to the commitment he and his wife, Diane, made to Farm Bureau and agriculture. Christopherson said if he was going to be speaking for farmers, he’d “jolly well better be walking in their shoes.” Besides raising corn and soybeans, the Christophersons also have a hog-finishing operation. He said it was difficult at times to park the tractor or combine to head off for meetings. Diane, and a neighbor and his son, helped pick up the slack. “Diane carried a lot of the load,” said Christopherson. “It’ll be nice to have him home more,” said Diane Christopherson. She does nearly all the grain hauling and field preparation work as well as the livestock chores. Shepard said Christopherson has “sacrificed” his farm “for the good of the organization” on many occasions. He said Diane Christopherson is “one of a kind.” 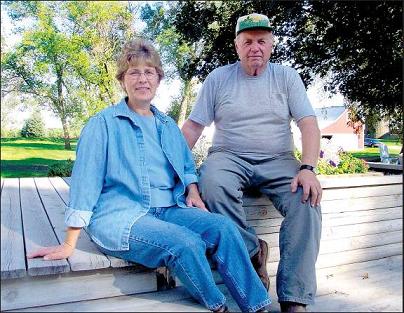 Diane and Al Christopherson share a rare moment Tuesday of sitting still on their rural Pennock farm.
After 30 years in state leadership roles with the Minnesota Farm Bureau,
Christopherson stepped down as president in November, 2005
Tribune photo by Carolyn Lange

The most frequently asked question Christopherson has been fielding since he announced in August that he would be stepping down as president is what he’ll do when he’s no longer rushing off to meetings around the state and around the world. Neither he nor Diane are “built for sitting around,” he said, which means Christopherson won’t be slowing down much once his responsibilities end with Farm Bureau in a couple months. The couple has already started a major landscaping project at their home, a project that Christopherson said he honestly relishes. He’ll also continue his leadership roles in other state organizations and committees. “And I’m going to get back to my farming, like I should be doing,” he said.