Moravian Brethren
From the birthday poem we learn that because of his music and its spiritual influences, Johan Herman Mankel wanted to do and experience more, so he left Niederasphe. From the late 1780s until 1799, Johan traveled between different areas of Holland and the Saxe-Weimar and Silesia regions in Germany. According to the poem, he spent time in Zeist Holland (probably the late 1780s). There he joined and lived in a ‘Brüderhaus’ or Single Brother’s House of the Moravian church where he experienced a type of spiritual awakening. The Moravian Brethren, who were and are Protestants, founded the town of Zeist (south of Utrecht) along the Rhine River in 1764, following religious persecution in their original settlement in Herrnhut, Saxony, east of Dresden, Germany.

A brief background of social life in the late 18th century Moravian church is relevant to better understand events surrounding Johan. At this time in their religious history the Moravian church (also called Herrnhuters, Unitas Fratrum, the Brethren) lived in committed Christian communities and stressed ethical conduct and religious piety. Because they valued the importance of moral conduct, members were segregated by sex, age, and marital status. Single men (Brothers), single women (Sisters), married adults, children, widows, and widowers worked, ate, slept and lived in separate houses or “choirs” because of a philosophy that close association with people of the same age, sex, and marital status would promote spiritual growth and fellowship without pressure of sexual issues. Though members did not take vows of celibacy, leaders punished sexual misconduct. Also, it was common for individuals to discuss and review with leaders their past actions and sins, similar to a confession.

In 1790 Johan left Zeist for nearby Amsterdam where he again lived with the Brethren. According to the poem, Johan was worried and sorrowful when he left Amsterdam and the Brüderhaus to go to Herrnhut, Lausitz and Niesky in Silesia, near the Polish and Czech borders. (The Moravian Brethren founded Herrnhut in 1722-1727 following religious persecution in Moravia and Bohemia.) While with these Brethren Johan studied music with a master and his love of music was reinvigorated. According to the poem, what had been lost was blooming again! 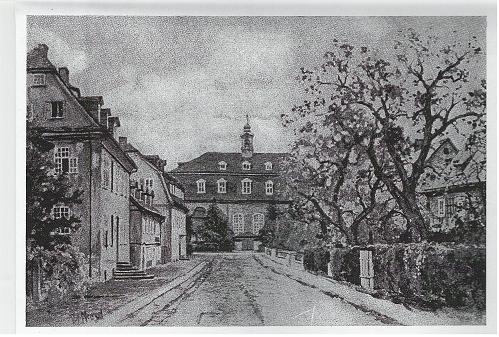 Duke Karl August's Royal Court
For some reason (not discussed in the poem) Johan left the Moravian community and traveled to the Saxe-Weimar region, because by 1792 he was a member of the royal court of Grand Duke Karl August (Charles Augustus, 1775-1828) of Weimar. At this point in history Germany was a collage of numerous kingdoms, duchies, grand duchies, and principalities, most ruled by noblemen such as Karl August. (Germany united as a country in the 1870s.) The Duke was typical of many noblemen who encouraged and financially supported literature, music, the arts and the artists. Famous writer Johan Wolfgang von Goethe was also a member of the Duke’s royal court at the same time as Mankel. Goethe administered the theatrical productions while Mankel was the royal head musician. Karl August’s reign was known as the Golden Age of Weimar.

German literature, music and the arts flowered in the many German kingdoms and royal courts before, during, and after the French Revolution. Ludwig van Beethoven (1770-1827) and George Frederick Handel (1685-1759) were famous German composers, along with Austrians Mozart (1756-1791) and Joseph Haydn (1732-1809). The southern states became known for their baroque palaces and churches. Immanuel Kant was an influential German philosopher. Goethe and Friedrich Schiller enriched the German language with their prose and poetry. It’s during this Golden Age of Literature and Music that Johan Mankel composed, taught, and performed music and was a member of a royal court.

In addition to supporting arts and literature German noblemen also fought in wars or ordered their subjects to fight. Thus Mankel and Goethe found themselves fighting with the Duke against France in 1792. (The French Revolutionary Wars began in 1789 and Napoleon led his army across Europe until his defeat at Waterloo in 1815.) Duke Karl August served as a major general in the Prussian army who joined their allies, the Austrians, to fight the French in the 1792 battle known as Cannonade of Valmy (in France).

Return to Moravian Community
After an unknown number of years with the Duke, Johan returned to Niesky where he was a schoolteacher in the Moravian community. Later he became the music director at the Moravian seminary and gave music instruction to the brethren who played violin. He was known as a talented musician with the right disposition. In 1799 Johan moved again, this time to Denmark